In the 19th in a series of posts on 2014 books entered for The Story Prize, Mark Chiusano, author of Marine Park (Penguin), discusses the challenges of coming up with a fitting cover for a book of stories all set in a specific place. 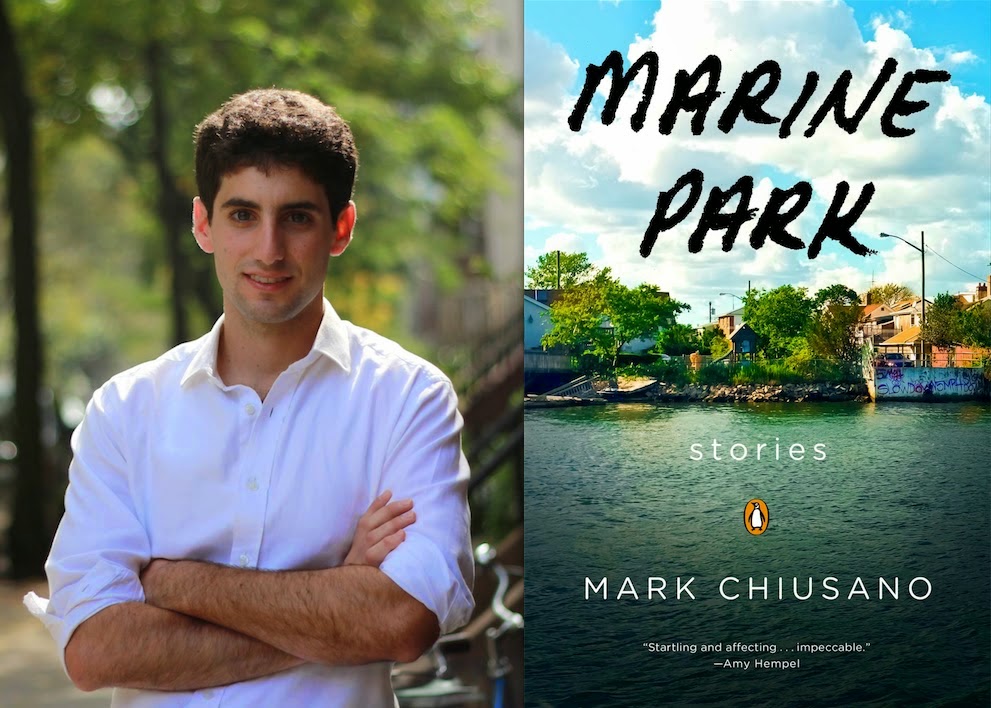 One of the most exciting parts of the publishing process for Marine Park was choosing the cover. I should preface this by saying that I was a very poor Art Appreciation student in high school. Visuals were never my strong suit. I had essentially no idea how a cover should look. The book is a collection of stories all set in the lesser-known Brooklyn neighborhood where I grew up, Marine Park. Once, in a Park Slope bar bathroom, I took a shaky picture of a grainy map of Brooklyn that I thought could be a first draft of the cover, or something. Some divine intervention stopped me from sending it to my editor. When the actual first draft of the cover came out, I was even happier I’d refrained. The designer had gone, on his own time, on a boat out around the curve of the borough off Jamaica Bay, and snapped pictures of the waterfront houses, cattails, piers, and beaches of the surrounding area. The image they’d chosen was sunny, bright, intriguing, alluring—a beach scene, houses in the distance and blue sky above, the choppy water below. My only hesitation was one of the items out on that choppy water—a jet ski. Come on, I said, there’s no jet skis in Marine Park. Hmm, the photographer said, or something to that effect. Photos capture reality, see, he could have told me. He hadn’t made the image up, of course. Perhaps he’d pointed his camera a number of blocks away from Marine Park proper, but essentially he was right. Still, I said, obnoxiously. There were no jet skis in Marine Park.
With great patience, the art department tried another photo. This one was truly perfect. Same great verticality, blue skies up top, choppy water below, and in the middle a row of houses, trees, and seawalls. I tried to decide where the photo had been taken—a bit west of the salt marsh Nature Center? Orthogonal to the park itself? Regardless, it fit the feel of the book perfectly. There was even some great graffiti on the seawall saying “Slow Down.” I could picture a few of the various curmudgeonly characters in the book, old Marine Park heads, saying just that to some young bucks. The designers found some fantastic font for the title itself, graffiti-like as well. Sold, I said.

About a month before the book came out, a friend called me and said he had a story I wasn’t going to believe. He was an Old Mill Basin native, not far from Marine Park. One afternoon, he said, he’d been sitting on Rockaway beach with his cousin and cousin-in-law, enjoying the beginning of summer. The waves were good, the sun was warm, there were no jet skis in sight, and he was reading an early copy of Marine Park. His cousin-in-law, a nice guy named Matt, does a double take when he strides out of the water and catches sight of my buddy reading the book.

Hey, he points at the finely calibrated cover. That’s my mother’s house! And so it was, apparently. On closer inspection he identified the place with certainty.

The three beachgoers were happily marveling at this shock of recognition, when suddenly, the thought hit Matt. Wait a minute, he said, indignantly. That’s not Marine Park—that’s Gerritsen Beach! GB, not MP! In my mind he started pounding his chest to underscore the tribal affiliations of our hoods.

In this way, I discovered, you can’t please everyone. But in the end the sky above is blue, the water below is dark and choppy, and the thin strip of land in the middle is someone’s true and permanent home.
Posted by The Story Prize at 10:17 AM