Monica McFawn and the Pursuit of Clarity

In the 20th in a series of posts on 2014 books entered for The Story Prize, Monica McFawn, author of Bright Shards of Someplace Else (University of Georgia Press), draws inspiration from a guy named Murray. 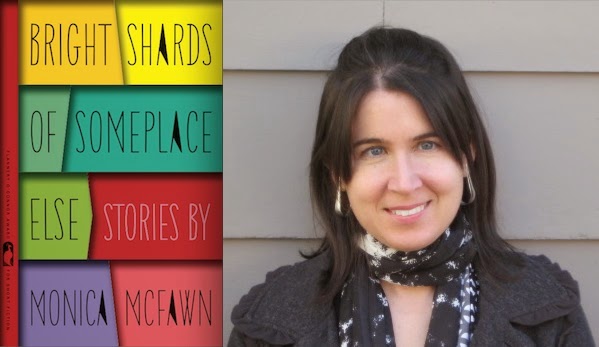 Do you ever borrow characters or situations from real life?

Years ago, I was living in a rural town in southern Michigan, working as a 4-H agent. My job was to manage the county’s 4-H program, and my duties were varied. I organized a shipment of shavings for the fair’s show ring, I counted unused piles of blue ribbons, I wiped the grease off pigs after a greased pig contest and other unimagined tasks. It was a far cry from the writing community I had just left, so far that when I once told a 4-H volunteer that I had an MFA in Poetry, he responded, “A Masters in Poultry? That’s good. Lots of kids here are interested in showing turkeys…”

My boss, Murray, liked to joke about my impractical background and citified ways. Despite our lack of things in common—I was a vegetarian poet in my late twenties, he was a sixty-something beef farmer—I liked him. Everyone did. Murray was tall and lean, with a concavity to his whole body, like a sapling bent by snow. Whenever he walked into a room, he aggressively put people at ease with little jokes and questions. Even the most withdrawn person would eventually be charmed, if only by his persistence. More than any of the colorful scenarios the job offered up, it is Murray’s character that I remember most.

Without fail, Murray seemed to force openness out of people who were normally anything but. This was most obvious during the weekly Horse Council meeting, a font of drama and infighting. The first moments of these meetings would be an idle volley of a low-stakes part of the agenda—perhaps what company would donate the paint for the horse stalls, or something. Then, the topic would shift into controversial territory, and the discussion would become a dense weave of puffery, posturing, and roundabout justifications. Murray would watch, sometimes drumming a leg and sighing. Then he’d speak.

“So the issue here, he might say, “is that the Horse Princess duties aren’t spelled-out? Right?”

It was his tone, rather than his words, that seemed to change the atmosphere. His voice had a frank, confessional quality, as if he were asking you advice over a beer. Yet he was also loud and exuberantly clear. Some people would answer him frankly, while the more scheming or indecisive types would look disconcerted, as if he’d spoke in another language. But the room, overall, would feel suddenly brighter, and the conversation would resume with new transparency. I took great pleasure in witnessing this—not because Murray was right but because, blunt as he was, there was an artfulness to his interruptions. He would break into moments of circuitous mutterings, so the clarity of his voice would be perfectly juxtaposed.

When I talked with Murray after these meetings, he’d lament the inability of the Horse Council to speak plainly. He couldn’t—or wouldn’t—understand why the group constantly ran aground in ambiguity and disagreements. He seemed certain that if people just got down to brass tacks, if they just spoke the basic truths within them, then there could be no misunderstanding.

Was Murray right? On one hand, I admire the embodied worldview of that boisterous, honest voice, a voice that could chase away any shadows, that could cut through guile and doublespeak to what lay beneath. On the other, the Horse Council’s problems were complex. The mix of personalities, ethical issues, and multi-familial tensions created a texture that was, in some ways, impenetrable. People could speak their deepest truths, and the impasse might only deepen. There is only so much clarity to be found.

It’s something I think about in my writing. Should a short story aim to say something clear about the world—should it be clearer than the world? Or should it instead faithfully recreate the entanglements, subtleties, and white noise of daily life? Maybe the answer seems obvious—we don’t want to end our stories with neat little morals. But the flip side is also true—a short story can’t just be eloquent murk. Everyone’s read beautiful prose in a story that seems to say nothing. It’s no better than being didactic.

Murray does appear, somewhat transfigured, in one of my stories. But his larger impact has been that he made me consider the role of clarity in art. My favorite stories are not like Murray, or the Horse Council, but like Murray at the Horse Council. The Council is colourful, difficult, fascinating, and opaque. It is the part of the short story that recreates life. Then Murray speaks. The tone shifts. His voice is the epiphany or a philosophical turn in a short story. Yet even as it illuminates the problem, it doesn’t solve it. All it does is startle us, for a moment, with a name for what we all see.
Posted by The Story Prize at 8:41 AM