In the 30th in a series of posts on 2015 books entered for The Story Prize, April L. Ford, author of The Poor Children (SFWP), describes a life-changing experience. 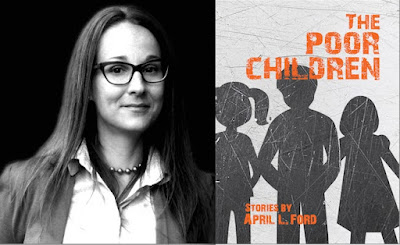 What keeps you going?
The threat of someone inscribing my tombstone with “Flossed daily & paid taxes on time.”

What do you think is the source of your impulse to write stories?
I nearly died at age seventeen, when I ran across an intersection on the yellow light. I got busted up inside and out, and spent four months in the hospital. The most distressing part was feeling left behind, watching family and friends leave the hospital without me; they were going on with their lives, upset though they were, while I was stuck in casts and slings (I couldn’t even “watch” visitors leave until the blood clots eventually cleared from my eyes). Have you seen Metallica’s music video for “One”? That was how I felt; and after I was discharged from the hospital, I swore I would never feel like that again. I’ve always loved telling stories, but I would say the car accident activated something within me more essential than love.


Describe your revision process.
I revise as I write. Some sections of the novel I’m working on now, for example, have survived reader scrutiny marvelously, whereas one particularly beasty chapter took me a year to get right. (There was this one time in summer 2014 when my spouse had to force me away from a single paragraph I had been revising for five hours.) But if I have to put a number on it, then I’ll say the third draft is my happy place. If I keep going after that, there’s a good chance I’ll overreach.

What’s the best phrase, line, or passage you’ve had to cut from a story?
How about the worst passage? I can’t believe I’m sharing this; it’s from a story I wrote as an undergrad, for the sole purpose of electrifying a professor. He was a wry, middle-age poet, and I was smitten. I never actually showed him any of my fiction, though our frequent conversations about craft kept me motivated. I wrote a lot of stuff for that guy, intended some of my greatest metaphors for him… Anyway, here’s the opening paragraph of “December Twenty-First,” a story I wisely abandoned long ago:


I traipse up the steps and open the door to Alanis on the radio crooning, “You see allll my light and you loooove my dark.” The trickling bulb over the entranceway casts a urine yellow stain into my apartment, yesterday’s garbage heaps shapelessly by the door. “You dig eeeeverything of which I'm ashamed, there's not anything to which you cannnn’t relate,” continues Alanis. My boots come off with a suction sound and I hook my jacket on the door handle like a three-eyed sewer fish somebody might catch in a sea of dolphins; it’s not beautiful but it’s one of a kind, worth relishing because those don’t come around too often.

Describe your collection in ten words or less:
Kathy Acker’esque, according to one reviewer. I’m cool with that.
Posted by The Story Prize at 12:10 PM