In the 26th in a series of posts on 2015 books entered for The Story Prize, Z.Z. Boone, author of Off Somewhere (Whitepoint Press), talks about stretching the truth to create suspense in a story. 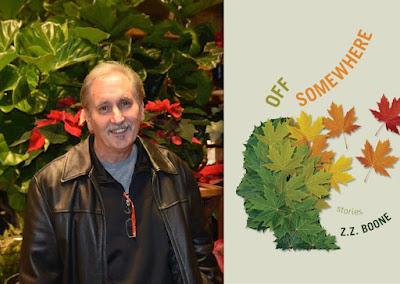 I lie. It comes naturally.

As a high school student, I invented a fake girlfriend named “Dixie.” While in the Air Force, I said I’d been a Golden Gloves boxer. In order to adopt our daughter from China, I exaggerated the amount of money I made.

Z.Z. Boone is not even my real name.

Last semester, I told my Introduction to Fiction students the following story:

One summer about ten years ago, while my wife was away on business in Germany, I decided to teach our seven-year old daughter, Lia, to ride a two-wheeler. I removed the training wheels from her bike, drove us both over to the empty school parking lot, and held the back of the bicycle seat until she seemed fairly skilled and properly balanced. Although I promised not to, I let go of my grip on the bike and watched proudly as our daughter wobbled away unaided.

What I hadn’t thought about was her lack of steering skill. She picked up speed on the downslope, shot from the parking lot into the street, and was struck by a hit-and-run driver.

I stopped the story there and started talking about something else, maybe some novel I’d read.

“What happened to your daughter?” a student in the back of the room asked.

In truth, the account is accurate right up until Lia rides into the street. She actually did quite well, despite falling once, and we went home and I made pasta.

A nice tale, but not one that’s going to motivate people (or readers) to ask, “And then what happened?” And that’s the question we, as storytellers, must force them to ask.

Many beginning writers make a common mistake. They write about something familiar, something they feel confident they can recreate precisely. Sunday breakfast. Profound talks with mom. My pesky little brother. When I tell them their work lacks tension, they defend it by saying, “But that’s exactly how it happened!”

I ask them to imagine sweet Anne Frank is hidden in their attic. The Nazis arrive and demand to know where she is.

“Could you lie then?”

Or I tell them to look at theatrical drama. Actors in costumes pretending to be people they’re not, reciting words that aren’t theirs, standing on a stage designed to look like someplace it isn’t. Total pretense.

A good piece of fiction, I try to explain, covers an event that your protagonist has never encountered before and will likely never encounter again. It has to be a day unlike any other. I also tell them to avoid writing based on theme. Theme comes from an honest heart, not an active imagination, and results in sermons, not stories. Let the reader arrive at his or her own version of the truth, not yours.

There’s this fiction exercise I drop on my students every semester. I have them write down three statements, only one of which is true. I give them fifteen minutes to think about the false ones, to try and defend them as the truth. Then I ask volunteers to come up and write their statements on the board. I set a timer for three minutes, and allow the rest of the class to ask questions in an effort to ascertain which of the three claims they think is genuine.

Some of the lies I recall include:
Generally speaking, the truth—memorable sports moments, beloved pets, surprise birthday parties—is far less interesting, far less fiction-worthy. It’s the lies that create more suspenseful stories, that cause us to widen our eyes and push forward in our seats. It’s the lies that make us willing to take that journey in search of the bigger truth.

It’s the lies that make us wonder what happens next.
Posted by The Story Prize at 7:00 AM