Edie Meidav Urges You to Fail

In the 12th in a series of posts on 2017 books entered for The Story Prize, Edie Meidav, author of Kingdom of the Young (Sarabande Books), encourages writers to take chances. 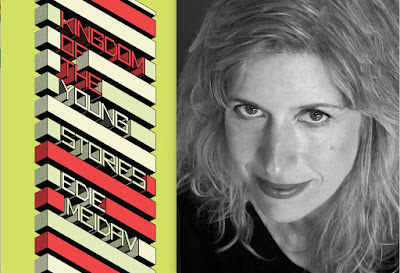 Best advice for any creator: Fail.

Fail not just better, not just once but do so frequently, boldly, beautifully. Flail as much as possible.

And if these words give you pause, consider drafts of artwork by almost any great painter. Or take Leonard Cohen, who remains one of our chieftains of failure. Even from the grave he appears to have died only half-completely, so resolutely present remains his life. One of his most penetrating songs speaks of the kabbalistic idea that through our flaws, our cracked selves, light best shines.

As he lived—bon vivant, zen monk, dandy, gracious, generous, self-absorbed, unable to commit, leaving a trail of broken hearts behind him, aware of his peccadilloes as an artist, singer, fellow human—so he died, ready for it but nonetheless shining forth this: the beauty of the incomplete, testified to by a man ignored for years, celebrated again at the end, but all along bearing the ability to reinvent himself as an artist, embracing whatever little was left of his voice.

Years ago, in my first awareness of the shard as a necessary companion to the creative life, I watched a girl drawing. We were at a summer camp riddled with the requisite mosquitos, shaming, joys, hysteria, and odd moments of education in exactly the sites one expects them least.

There on her bunk she sketched in a figure.

Stop, I wanted to tell her, stop right there, and there, and there. But she kept going. How beautiful it had been to see, as Elizabeth Bishop might have put it, the crypto-proto-ruin, the figure only as she began to allude to it, and what possibilities were foreclosed as the more predictable part of her began to fill it in. So arrived my first aesthetic lesson in the art of incompletion, in taking a path toward the unexpected.

Years later, in speaking with a fellow writer with a similar love of novel writing, he and I discussed the charismatic mystery of the unexplained and the unfulfilled. A character's backstory need not be known, but the energies of most beginning writers go toward filling in that figure.

Because readers wish to know, because we have orthodoxies about how to continue. Doesn’t the story have to end like this, we say, shouldn’t we know more about her?

Often the very thing we think we must do as we set out to write, or continue to write, or have finished writing something is to achieve that very beautiful platonic ideal that occurs somewhere, so tantalizingly, in the first eighth of any project. The ideal becomes visual meze, oversaturated, overglutted, every part presented and filled in, no hunger left unsated.

Yet among ancient altarpieces, we find beautiful the very roughest, those that peel and undo themselves most before our gaze. So our modern eye has learned how to calibrate what is present with what goes missing. So we have learned to love absence, which probably speaks both to our contemporary anomie and to something more enduringly existential. The funerary stele, the elegy: these, our oldest forms, celebrate absence.

Which relates directly to the mid-stage of any creative process. There comes a moment when we must willfully embrace the incomplete, where we must propose to ourselves a kind of ecstasy—literally, standing outside of, in this case, our original idea, whatever got us going.

Any singular artwork we witness, made by another, commands our respect in this way: It offers us a mirror ecstasy, a spine-shivering thrill since we are pushed out of our daily habits of hearing, thinking, seeing. We enter the work, we complete it through our imagining. The greatest artists lure us to incarnate ourselves subtly and differently. And, as recipients of art, our education rests in allowing the artist to teach us to find a new way to live in the world with the elements familiar yet the order shifted, life’s hierarchies questioned.

So what the creator can ask herself is this: What information do I need to gather now? What would provoke me beyond myself? How can I omit, how can I have a noble failure, what crack in the pottery might let the light shine in?

Try, when writing, to see if you can change your usual instruction manual. Abandon the platonic ideal of the finished object and allow what might at first seems to be an organic or aleatory irregularity to become your gift and singularity. What you pay attention to most is your gift, even if—especially if—your very attention is incomplete. If you wish to challenge the history of your discipline, resting in prior structures of construction will not help you. And if you are at the point where you have begun to repeat old tricks, cannibalizing past successes, you might need to enter your studio backwards, figuratively, as a way of honoring whatever thinking could split your assumptions, whatever waits for you to uncover its truth. Consider the suggestive beauty of both veil and shard, and always befriend failure; it will never desert you and might become your strongest ally, a guide for life itself.
Posted by The Story Prize at 11:38 AM