In the 11th in a series of posts on 2017 books entered for The Story Prize, Lee Upton, author of Visitations (Louisiana State University Press), answers a few questions. 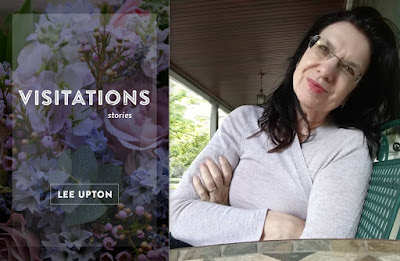 When was the first time you wrote an explicit sex scene?
That hasn’t happened yet…. I have that to look forward to…if I become an entirely different person.

What emotional states interest you as a writer?
Obsession. For example: In Visitations, a woman in the story “A Stalker” says of her obsession with a man who had once loved her: “Being wanted—it was like a worm delivers a drug right into your bloodstream. Then you’re unwanted, but the worm wants more.”

Another emotional state that interests me: Denial. In another story in Visitations, “Gods and Goddesses in Art and Legend,” a character attempts to numb her grief: “People paid too much attention to what passed for romantic love. It was sentimental, overwrought. Hyperbolic. In the end, it wasn’t profound. No, it was only regrettable, not tragic or even sad. Still, people shot each other in the head because of it.”

Are the stories in Visitations united in any way?
Yes. Many pivot, at some level, around the subject of books. About over-valuing a book and undervaluing one’s own experiences. Or undervaluing books. How myths and fairy tales and early childhood reading contour an entire adult life. Why it would be such a pleasure to join the world’s laziest book club. The crevices inside books from which we can pull fresh meaning.

What habit do you recommend for other writers?
Napping. I used to work full-time at a credit agency and struggled to stay awake. I worked my way up to eight cups of coffee a day, and I was still sleepy. I remember how desperately I didn’t want to be exhausted after work so that I could write. When the weekend arrived I was so tired that I fell asleep in the afternoon with my papers and books around me on the fold-out couch in my studio apartment. My exhaustion might have come from not only working hard and being bored while I worked, but from loneliness. Loneliness is exhausting.

The thing was, when I woke up from that first nap on my first Saturday of my first week at the credit agency, I began to write with great concentration—as if words had been assembling themselves while I slept. It was like that fairytale, a touchstone for so many writers who rely on the unconscious: “The Elves and the Shoemaker.” While the shoemaker sleeps the elves cobble shoes for him. Later I made friends, moved into a house with roommates, met others who wanted to be writers, and wept with gratitude for my new life. Those naps had helped me, but I no longer needed them as much.

I’ve had children—and so like anyone else who has raised a child, I know about standing exhaustion and what a privilege it is to nap. Now, usually, I can’t nap often—because of other responsibilities. But a while back, after a series of small crises, I went to bed in the late morning and napped. After I woke up, within two hours, I napped again, and then I napped yet again. I napped so much that I dreamed I was napping. In the dream I kept telling myself “Wake Up! You’re napping too much!”

I hadn’t wanted to nap; I wanted to write instead. When at last I woke I experienced what I’d felt all those years ago: the softening of boundaries, the sense that I could easily slip through a portal into intense concentration. As if the elves had been cobbling for me. I need to find ways to nap more often.

How do you know when a story is finished?
I’m going to answer the question by asking another: How do I know when a story begins? I tend to write long fiction that needs to shrink. Often that requires deleting many pages of false beginnings and frumpy middles. When I find the true beginning I can work toward the true ending. One encloses the other, in embryonic form. There has to be a sense of movement too, a sense of the tactile. You know how a card shark can shuffle cards and the cards, splayed out, are then snapped back into one stack? That’s how it doesn’t feel, although I’d like it to feel, at the moment when a story is finished.

Where do you get your ideas?
Often I’ve heard this question referred to in terms of frustration—sometimes with a clever put down from the writer to the questioner.

Why does the question elicit such derision?

Because stories are not “ideas”? (Yet stories can’t escape ideas, and even slippery stories foster ideas.) Because there is no physical space from which the author retrieves stories? (Yet we speak of scene “building,” and aren’t we often indebted to spatial metaphors?) Or is it because some writers guard jealously their sources of inspiration? Or because the question might suggest that writing is merely a matter of finding a premise and, as such, the question downplays the diligence, discipline, intuition, and luck that writing a story requires?

But, really, the question is a compliment—you have ideas! Writing—it’s like nailing clouds. Where do you get your hammer?

I love the question even if it is largely unanswerable. It humbles us and elevates the craft. Here’s the best I can do: I get my ideas from missed connections, things that turn my stomach (oh rich source: shame, linking us all as social creatures), the chasm between what we’re supposed to feel and what we actually feel, incongruities (especially comic incongruities), the urge to reflect the dignity of those who are ignored or neglected and treated unjustly, the wish to illuminate what might be called the inner life in a way that may have a bearing on a reader’s life. Moments of gratitude and love unearned but desperately needed. And, often, affection for the stories I grew up with and the urge to pay homage to their self-renewing, thorny, perennial mysteries.
Posted by The Story Prize at 9:00 AM