Amy Hempel Has Won The Rea Award for the Short Story 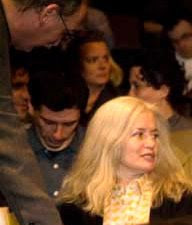 Amy Hempel is this year's winner of the Rea Award for the Short Story, which is given annually to a living American or Canadian writer whose published work has made "a significant contribution in the discipline of the short story as an art form." The $30,000 award is not given for a particular collection or even a body of work but rather for the originality and influence of the author's work. A three-member jury of writers (which I'll supply when I get that information), chooses the winner.
The award started in 1986 and its winners are a who's who of American and Canadian short story writers. Last year's winner was Stuart Dybek. The photo to the left was taken at The Story Prize event in February. That's Story Prize Winner Jim Shepard (before he knew he was the winner) leaning over to greet Hempel, whose attention seems elsewhere. Congratulations to Amy Hempel for achieving this honor.
Update: It turns out the jury for the 2008 Rea Short Story Award consisted of Sheila Kohler, Margot Livesy, and the aforementioned Jim Shepard, which makes the choice of photo even more opportune.
Posted by The Story Prize at 11:41 AM