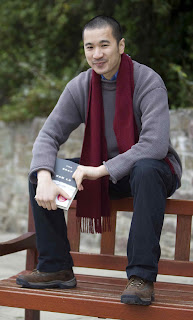 Congratulations to short story writer Nam Le (The Boat), who is the winner of the ₤60,000 biennial Dylan Thomas Prize, which goes to a writer under 30 and is the U.K.'s largest literary prize. The result was announced on Nov. 10 at an event in Thomas' native Swansea, Wales, along with a special message from Welsh-born actress Catherine Zeta Jones. (I wonder if Renee Zellweger is available for The Story Prize event. )

From our partisan point of view, it's nice to see a short story writer win an award that's also open to novelists and poets. And by the way, on Nov. 17 Nam Le will be participating in the 5 Under 35 reading in New York as part of National Book Awards week. So far his youth seems to be serving him well.
Posted by The Story Prize at 12:39 PM