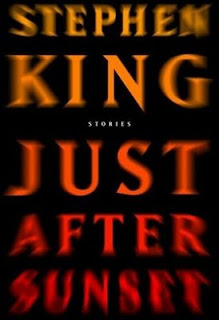 Here's a bit of news from Publishers Weekly:

Reflecting a market in which publishers are significantly reining in their printings, Stephen King’s Just After Sunset arrives Tuesday, November 11, with a 900,000 copy announced printing, down from the 1.25 million copies projected last summer.

I'm sure that may be disappointing to King and Scribner. But, if you figure that the average print run for a hardcover short story collection is probably under 10,000 (most far under), that means the print run for King's book is roughly equal to the combined run of 90 typical short story collections. That's more than the total number we'll receive as submissions to The Story Prize in 2008.

Put another way, if you were to place all of the printed copies of Just After Sunset on one side of a scale and all of the printed copies of nearly every other short story collection published in the U.S. this year on the other, the scale would probably tip King's way. I say nearly all, because Jhump Lahiri's Unaccustomed Earth, which for one week (lest we forget) sat atop the New York Times Best-Seller List, no doubt has far more than the average number of copies in print. If Just After Sunset reaches the top of the list in the weeks ahead, that will make two stoy collections at No. 1 in 2008. Not bad for a form many consider to be foundering.

Given King's megapopulatity, it's great that he writes stories because it means that many more people will read them. In fact, I'd guess that, given the powerhouse sales of his book and Lahiri's, more Americans will read a short story collection this year than any past year. King has been a generous supporter of short fiction and of other writers' collections. He also writes some darned good stories. So, literary readers, don't hate him because he's popular.
Posted by The Story Prize at 10:24 AM