How Eddie Chuculate Sets a Story in Motion

In the 61st in a series of posts on 2010 short story collections entered for The Story Prize, Eddie Chuculate, author of Cheyenne Madonna (Black Sparrow Books), talks about the inspiration he drew from a painting. 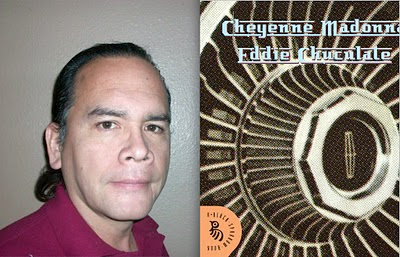 Tell us about one of the stories in your collection.
The story, "Galveston Bay, 1826," shows a party of Cheyenne Indians journeying to see the ocean for the first time. The story is based on an actual event, told to me by friends. My first attempt at writing it was in an abandoned novel, where one character merely told the story to another. After I put the story down for a year or two, I returned to it, this time dramatizing and imagining the events. It created a world of its own.

At what stage do you start seeking feedback on your work and from whom? After I think it's finished, I don't mind letting fellow writer friends who I know will give me an honest, objective evaluation, read it. I try to refrain from letting friends or relatives read it, who invariably give you the standard "I think it's great" reaction, especially if they think they are in it. But that's not to fault them, as they aren't writers or critics and probably just don't want to hurt your feelings if they think it's bad.


What kind of research do you do?
I hardly do any any extensive book-related research. When I wrote "Galveston Bay, 1826" I checked out a pile of books from the library, but took them back after confirming that a certain tribe of Indians lived along the Galveston Bay coast at a certain time. I realized that if I buried myself in research about the tribe and time period, it could squelch my imagination.


Describe a technique you've learned from other narrative or non-narrative forms of expression.
The opening of my story, "Galveston Bay, 1826," was influenced by a painting, "Prairie Fire," by the Comanche-Kiowa painter and sculptor Blackbear Bosin. I had always greatly admired this painting, and when I began my story, used his image of Indians on horseback riding along the fringes of a fire, which was chasing away animals as it progressed. This is a technique that can help fire the imagination and set a story in motion.
Posted by The Story Prize at 5:43 AM