Toni Jensen: How Months of Thought Led to a Story Written in an Afternoon

In the 67th in a series of posts on 2010 short story collections entered for The Story Prize, Toni Jensen, author of From the Hilltop (University of Nebraska Press), describes how a one of her stories came about. 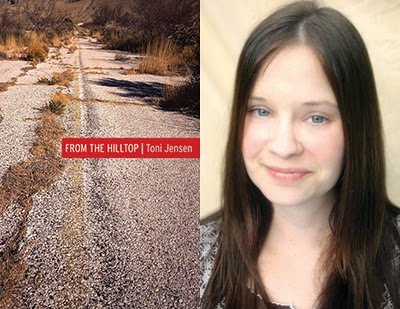 I wrote “At the Powwow Hotel,” one of the stories in my collection, during one afternoon at Sugar Brown’s coffee shop in Lubbock, Texas. For months, I’d been holding two stories in my head—one about a moving cornfield and one about a West Texas family dealing with grief when a family member dies suddenly. For the cornfield story, I thought the narrative would track the cornfield and its followers as they moved. But this idea was too complicated for one story—too many settings and people for what I imagined to be a fairly short story. For the family story, I had an unusual amount of trouble deciding whose story it was going to be—the father’s, the mother’s, the son’s?

I was a graduate student at Texas Tech University then, and with the deadline of that night’s workshop looming, I sat down to write. One of the best pieces of advice I ever received about writing was to write the things of which you’re the most afraid, the things you can imagine but would really rather not. I loved imagining a moving cornfield, but I’d really rather not imagine having a child, a happy family, and then having to leave them so suddenly, without time to prepare. I’d rather not imagine what happens after, either, to those who are left behind. But that’s how “At the Powwow Hotel” began—with me pushing past the fun of the cornfield to the grief of those characters, imagining what it would be like for the father and son who are left behind, what it would be like on that son’s next birthday.

I had thought a moving cornfield was enough occasion for a story. But, of course, without the emotional undercurrent—the real people and their real problems—a moving cornfield isn’t a story, is just a gimmick. The birthday was the occasion for the story. Once I understood the occasion, the story came fast. The other layers in it—the location, how the son Lester and the father Jack feel about being Native people in West Texas—came from my own experiences and so were right there at the surface, were an integral part of the whole.

I wrote the story that afternoon in just under four hours. It might have taken longer, but workshop was at 6 p.m., and I’m good with that sort of definitive deadline. The story still stands, almost word for word, as what I wrote that afternoon. Because the stories in the collection are linked, though, I later did change a few details so that characters from the other stories appear in this story as well. Otherwise, it’s as it was the day I wrote it.

The conventional wisdom about stories written fast is that they fall from the sky or heaven or some other wonderful place, that they’re “gifts.” But that’s not getting it quite right. To say they “fall,” implies the writer has little to do their existence; to say they’re gifts also implies the same—that they “arrive.” Fast stories are not gifts—they do not arrive by luck or magic or divine intervention.

When I sat down that afternoon and wrote “At the Powwow Hotel,” I had been writing the story in my head for months. I’d been thinking about its characters and setting, had been working through plot problems while washing dishes or walking the dogs. I also had been writing other stories at a furious pace—at least one a week—for months. Not all of those stories were good. Certainly, not all made it into my collection or into print elsewhere. But all helped me understand how stories work, how my stories work—all helped me be able to sit down and write that one fast, complete story.
Posted by The Story Prize at 7:43 AM