In the eighth in a series of posts on 2011 short story collections entered for The Story Prize, L.E. Smith, author of Views Cost Extra (Fomite), discusses voice and character. 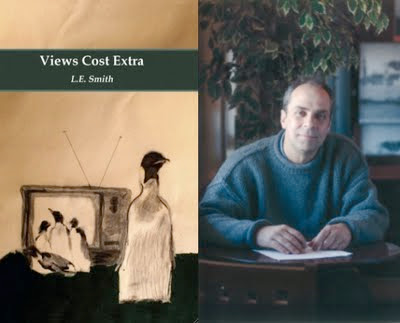 Finding VOICE is not fiction to me.

It seems to me that character comes from voice, from attitude, even more than from actions committed. Anyone can do anything in this world, and probably will. Actions are erroneously described as “in character” or “out of character.” I contend that all things are possible. Everything we do is “in character.” We surprise ourselves all the time. We only seem to deal out contradiction. It is how we react to what we do or to what others do that never varies. Or that’s how I see it. So I have tried my best to establish “voice,” point of view, in my stories, as that never changes while our actions may vary widely. One of my writer friends who blurbed this book of stories calls me a “ventriloquist.” I think that’s right. I have a basic plot in mind when I write, but then it’s the voice that leads me to where the story wants to go.

I have always had a penchant for assuming other voices. A tutorial with a frustrated English professor over the deficiencies in my essay writing in grad school pointed out my emphasis in tone over argument. I told him that my essays suggest argument. That wasn’t enough for him. The problem was that I had been asked to analyze Faulkner’s writing, which led me to assume a Faulknerian tone (entirely unavoidable when immersed in his prose) and to ask the reader to follow the implied threads of argument. The point being, I have always associated voice with message.

In writing this collection of stories, I had no critic leaning over my shoulder, no patient mentor from an MFA program, no friends in a writing group, no publisher or editor eager for results. Just lots of time by myself with these characters talking to me about how they feel about things, and no idea any of what they say would ever make it into print. But once I have a voice in my head, a whole other world opens up for me to explore. I can’t resist.

One of the clearest examples in this collection is the story “Murder in the Red Barn,” which I wrote to flesh out a Tom Waits song. Tom’s song, same title, is powerful because it implies so much and leaves the imagination to fill in the details. So I listened to that song a hundred times, made notes, drew diagrams, invented a southern town (yes, a little like Faulkner), but it wasn’t until I decided on an Irish narrator that the story came together: He tells dispassionately the tale of his daughter who left home for America and who has always been a killer, who liked especially, even as a child, the butchering chores that need doing around the farm. The narrators’ folksy, non-judgmental, underwhelmed response to all the terrible things that happen in this story make the tragedy seem fated from the start. Or that’s how I see it. But even more, it’s the Irish idiom that takes the story deeper and wider, because it asserts a cultural response to tragedy. An Irish attitude. At least that’s how it “sounds” in my head.