Brian Evenson and the Twelve-Year Story

In the 71st in a series of posts on 2012 short story collections entered for The Story Prize, Brian Evenson, author of Windeye (Coffee House Press), discusses the long and short of it. 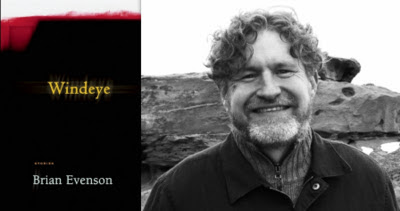 What made you want to become a writer?
When I was twelve my mother published a science fiction story in a small anthology, and then went on to write a few more stories. To give herself time to write, she would set my four siblings and me up doing something while she was writing—drawing, painting, etc. Since I was the oldest, she set me up with our manual typewriter and encouraged me to write a story. After spending an hour or so seeing how many keys I could make stick together by hitting them at once, I ended up deciding it might be worth it to actually try to write something. I did, and was surprised to find I really liked the process of writing.

Where do you find inspiration?
I’ve always been a strong believer in the idea of a writer finding inspiration from anywhere, and trying to be open to all the different directions inspiration might come from. I get a lot of inspiration from other stories, from reaching a point in a story where I think, What might have happened if the story had gone in this direction instead? But I also get inspiration from music, from events in life, from idle thoughts—just about everything at one time or another.

What obstacles have you encountered in your work, and what have you done to overcome them?
I think most of my obstacles have been self-inflicted. A big part of being a writer is figuring out how to get out of your own way.

What's the shortest time it has taken you to write a story?
When I was very young, I’d write stories in a single long sitting, then revise them a few times very quickly. The story could potentially go from flash of inspiration/idea to finished product in less than a week. The only time recently I had something like that happen was when I wrote “Windeye”—the actual writing was very quick, and it didn’t need much revision: All that was done in just a few days. At the same time, I’d had the idea for the story probably several months before, so it had had a long time to percolate.

What's the longest time it has take you to write a story?
There’s a story that I began when I was 17 and which I didn’t finish until I was 29. I obviously didn’t work on it the whole time, but I worked on it quite a bit over the years. I couldn’t quite get it right, but also still felt there was something there, waiting to happen. Finally, after twelve years, it did.

How often does an idea for a story occur to you, and what triggers those ideas?
I’m lucky in that I have many more ideas for stories than I can actually write. I think it’s really a question of being willing to let your mind explore the possibilities that the world or other books don’t take—not only living your life or following that plot but always thinking about what might have happened if that life or plot had swerved in another direction, even very quietly. That for me is the trick—quiet differences rather than dramatic ones that very slowly open onto completely other worlds.

What’s the worst idea for a story you've every had?
When I was in my early teens, I wrote a story that began “I am a rock. I live in the center of the earth.” Turns out that it’s hard to have dramatic tension if you’re a rock that can’t actually move, surrounded by other rocks. I tried to make the most of it, but that story is mercifully hidden away in my files.

What story by another writer do you most wish you'd written?
There are a lot of stories I really admire by other writers. I think my choice would be Franz Kafka’s “A Country Doctor,”,which strikes me as doing about as perfectly as possible what I’d like to do with my own fiction. But there’s also William Trevor’s story “Miss Smith.” And there are so many others out there:  Kelly Link’s “Catskin,” Jessie Ball’s “Pietr Emily,”  Dino Buzzati’s “The Falling Girl,”  pretty much anything James Salter has written. It’s very hard to choose…
Posted by The Story Prize at 12:00 PM