Claire Vaye Watkins and the Myth of the Good Idea

In the 72nd in a series of posts on 2012 short story collections entered for The Story Prize, Claire Vaye Watkins, author of Battleborn (Riverhead Books), discusses bad ideas for bad stories and bad ideas for good stories. 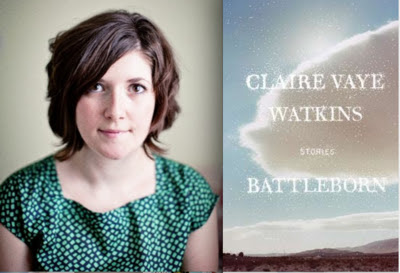 What’s the worst idea for a story you ever had?
It’s difficult to determine the worst idea I ever had for a story, and not just because I’ve had so many. There was the one about a town that builds a rocket ship to colonize the moon, deciding to leave all the rabble-rousing feminists behind. There was the one about a stoner dropout whose absentee father recruits him to repair his failed marriage (the stoner agrees, inexplicably, and ends up with his dad, watching his stepmother have sex with her new lover atop a trampoline. Naturally, they watch from beneath said trampoline). There was the one about two brothers who ride bikes through town after a flash flood has garlanded the streets with carcasses of drowned tabby cats. A Judy Garland figure tries to seduce a young guest—a trailer park chubber named Jellyroll—at her ten year-old daughter’s birthday party. A couple travel to Fort Vancouver to nurture their last shred of love and respect for each other, which is, of course a literal shred that closely resembles menstruate, and which they keep in a Tupperware dish, for it is, yes, animate (chase scene!). There was the one—a comedy—about a mother who returns to college and chains her son to a boulder in their front yard because she suspects him of masturbating to an issue of Reader’s Digest she’s not yet read.

Those are perhaps obviously rotten ideas, but what about the 9/11 story wherein a teenage girl allows her best friend to be gang raped? Or the story about a gay madam who falls for a foxy Italian tourist who holes up in his brothel when the Italian’s companion disappears in the desert? Or the one about the Forty-Niner who can see the future? Or the one where pretty much nothing happens except two abortions?

Those all sound pretty lousy, too, and they may be, but those are the ideas for some of the stories in Battleborn. My thinking is there’s no such thing as a bad idea for a story. Or perhaps what I mean is every idea for a story is bad until you make it good. Any time I’ve written anything good I’ve spent the vast majority of the composition process convinced it was an utter stinker. And they were stinkers, until they weren’t, at which point they were done. The only way to get from one to the other is work. That’s the tiny, tremendous membrane separating Joshua, the homesick and clairvoyant Forty-Niner in “The Diggings,” from poor lil’ Jellyroll.

Debunking the myth of the good idea is essential for the short story writer. It is, I think, essential for any writer working in any genre other than film or television. There’s a reason fiction writers don’t pitch their books (imagine Toni Morrison saying, “Picture this! Ghost baby has sex with her mom’s boyfriend! It’ll win a Nobel!”). The idea is a formality, mere permission. The triumph is what you do with it.

This post is dedicated to the memory of young Jellyroll. May he rest in peace.
Posted by The Story Prize at 12:00 PM