In the 39th in a series of posts on 2013 books entered for The Story Prize, Guinotte Wise, author of Night Train, Cold Beer (Pecan Grove Press), discusses where and how he works. 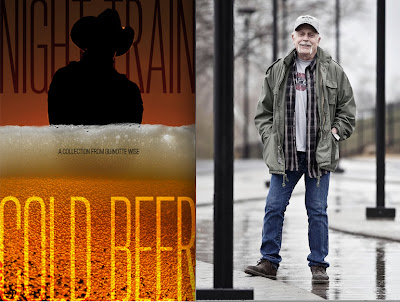 Where I'm sitting right now, sort of a booth/nook in the kitchen with a little shelf system music deal that I forget to use, coffee nearby, dusty as hell because I never clean it, dust overlays everything, laptop, papers, books. Odd thing is I have a loft area in the studio we buillt in the back yard of the house, with a great desk, bookshelves, music, quiet. I just haven't made the leap to trying to work out there. Everything I've written that's published was written here in this 1950's-like breakfast nook. The booth seats look like Denny's surplus.

What's your approach to organizing a collection?
I look through stories I've written that have a sort of sameness of element—maybe that element is ambiguity, or maybe it's that peculiar switch of mood or oddball human dynamic that takes things in a different direction than one would want or expect. I mean "linked stories" don't have to all be set in a theme park or Japan or whatever. At least, not to my way of thinking. I could be wrong. Often am.

In what other forms of artistic expression do you find inspiration?
I'm a sculptor, welded steel. One might think one activity might take away from the other, but I've found that when I'm stuck writing, if I just go out and start work on a sculpture project or continue working on something that's midway, I become unstuck on the other activity. Right now I'm working on a bull with Caterpillar tracks on either side of it that is scheduled to go to Illinois to a hotel built on the site of the original Caterpillar plant. And I'm working on a novel set in Los Angeles. Totally dissimilar, yet one spurs the other.

How often does an idea for a story occur to you, and what triggers those ideas?
Often, I'd say. I tend to look at so many things as story possibilities. I live rural, so a passing vehicle on a gravel road can start me thinking. Or a cow getting up from a lying position—they always get up butt first, while a horse gets up front first. The funny little noise a hawk makes when it dives to grab a fieldmouse. I would think that would scare hell out of all little prey, scatter them pretty good. But they keep doing it, the shriek "I'm coming to get you" noise. Out walking on a hot, hot day, I saw the road ahead go up, down, up, down as it went off in the distance and it was so desolate and sad I wrote a story when I got back. It reminded me of rural areas where I'd worked on bridge jobs. Rural roads I'd traveled to get to rodeos. Strange Ozark road trips to nowhere. Then, in more peopled situations, like opening night of sculpture shows in the city, you get all these people loosened up by free booze and wine, and they say things. Story ideas occur. Galleristas glide through, model-like beauties who act as though they should really be somewhere else, perhaps poolside at Karl Lagerfeld's residence.

What's the best and worst writing advice you've ever gotten?
I can't really think of the worst advice I've gotten, as I jettisoned it quickly after getting it. On several occasions. But the best advice would be that of Al Watt who said give yourself the permission to write poorly on the first draft. Or that of Robert McKee whose screenwriting workshop I attended when living in LA years ago. It was: Turn right at the bottom of the stairs, look for the blue canopy. The restroom door is appropriately marked. Seriously, that workshop was chockful of great advice. As was Ropewalk in Indiana. I urge anyone to take a workshop featuring writers they admire. I got to meet (and be guided by) Barry Hannah and Bob Shacochis at that one, and it stayed with me for good. "Stay in the room," I think, is good advice. Whoever does that, gets done.

I used to write Toyota commercials at Saatchi & Saatchi in California and got lots of advice from account executives. I got less and less of that as time went on, as my reactions to their advice was so crazy and unpleasant, that they gave up. And the commercials aired. The less I wrote in a commercial, the more the client accepted them. Which hearkens back to the advice, show, don't tell. Especially in TV. As for the question, I think I took the long way around the barn to answer it. Can you repeat the question?
Posted by The Story Prize at 8:00 PM