Seth Johnson and the Anti-Story

In the 40th in a series of posts on 2013 books entered for The Story Prize, Seth Johnson, author of The Things We Do for Women (Whitepoint Press), discusses resolving to write stories without resolutions. 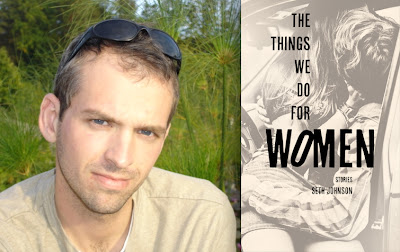 Several years ago I worked for a corporation that delivered all of the office stereotypes—tall, gray cubicle partitions, potlucks with meals made by people you knew didn’t wash their hands, cheesy birthday parties, the adulterous couple who ate lunch in the parking garage—all the stereotypes except for laziness. The work was constant, confusing, chaotic. Often I’d wake at 2 a.m. thinking I missed something at work.

The gunman has become an active and perhaps celebrated figure in American culture. Sometimes several “mass” shootings happen within just a few weeks. This is the kind of stuff I watched on the TV in that office’s break room. Once, a series of shootings had occurred and while my co-workers gasped at the news or walked off desensitized, I looked around and formulated a quick recipe for a gunman: mentally, a little off, maybe plagued with a past tragedy, completely self-centered, a dash of adultery (or lack of intimate relations), and a crap job. I wasn’t sympathizing with the shooters; I viewed them as people, just as I view you as a person.

I began writing stories about a gunman or a potential gunman. Many of these stories are in The Things We Do for Women. As the characters began to move and live, I realized that for the work to project the angst and uncertainty, the ilk of disconnection perhaps felt by a gunman, I needed to write anti-stories—that is, stories with no definitive resolutions, no way out, no money shots. Most of the stories written in the main protagonist’s POV are anti-stories. The intent is to leave the reader mired in the character’s emotion, yet unsettled. Sometimes when we wake our hearts are thumping from a nightmare’s fear or maybe we’re laughing because of a joke that woke us or smiling from a joyous dream. This second in bed, on the cusp of wakening, we hold the specific, unadulterated, raw emotion the anti-story aims to exact.

I explored and wrote and rewrote. Eventually, the collection presented its glue, its seduction, the frightening blood-orange gem: functional people are capable of horrible things.

Traditionalists probably dislike these attempts, this style. The Freytag Pyramid is the ancient God of story. But the characters themselves, the collection itself, the fact we should know by now there are no resolutions—only perpetual chaos at best—dictate the story.
Posted by The Story Prize at 7:29 PM