In the 36th in a series of posts on 2013 books entered for The Story Prize, Laura van den Berg, author of The Isle of Youth (FSG Originals), discusses her years-long quest to write a story about Antartica. 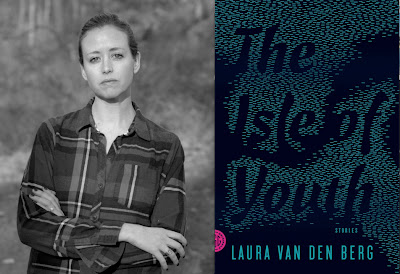 What’s the longest time it has take you to write a story?
A story in The Isle of Youth, “Antarctica,” was almost a decade in the making, in that for about eight years I had been trying and failing to write a story set in Antarctica. With each try, I would get a few pages in and the story would turn to dust. I would push on, writing one inert scene after another. The word count would tick up; the characters would grow flatter and more uninteresting. At my desk, panic would set in. For almost a year, I struggled with a draft called “Whiteout” before finally shelving the story. A few months later, I tried again and wrote a very unfortunate ending scene that involved Emperor Penguins. I didn’t need a year to know that one was a lost cause. And yet, I remained incorrigibly drawn to the landscape of Antarctica—the isolation, the severity, the profound strangeness—but couldn’t find the right story to unfold within that landscape, the right angle of attack.

Looking back, I can see the wrong turns. I kept trying to write from the perspective of a scientist on a research station. I have not been to Antarctica—nor am I a scientist, and by “not a scientist” I mean barely able to name an element on the periodic table—and I struggled to write convincingly about the landscape of Antarctica from that “insider” perspective. I always tell my students that when it comes to what we can write, we are only limited by our own imaginations, and I was coming up against the limits of mine.

After my third failed attempt at an Antarctica story, I gave up. I threw out my drafts. I tried to forget all about whiteouts and Emperor Penguins. I moved on.

In early 2012, I heard about an explosion at the Comandante Ferraz research base in Admiralty Bay on the news. Two men were killed. The story stayed with me. A few weeks later, a line got stuck in my head: “There was nothing to identify in Antarctica because there was nothing left.” Right away I was flooded with questions. Why was this person in Antarctica? Who or what was she there to identify? Why was there nothing left? This line soon became the first line of a new story, a new attempt at writing Antarctica, and eventually two interlocking narratives emerged: a present thread set in Antarctica, where the narrator has come to investigate the mysterious death of her scientist brother, who perished in an explosion, and a past thread set in Cambridge, MA.

This incarnation felt different. First, it was mercifully free of Emperor Penguins! Second, since I was writing from the point-of-view of an outsider, I no longer felt limited by all that I didn’t know about Antarctica—outsider, I understood. Research became an adventure, driven by the burn of curiosity, not a slog to fill impossibly large gaps in information. And I also had the anchor of Cambridge, a place I know intimately, as a counterpoint. By May of that year, after almost a decade of trying to set a story in Antarctica, this new story, titled—what else!—“Antarctica,” was finished.

I also tell my students that whenever we are actively writing what we don’t know, chances are we are also writing what we do know at the same time—even if our story is set on a space station or during the Crusades, probably some aspect of the emotional topography is familiar. It is often that “emotional autobiography” that gives life to imagined worlds, that gives the strange the necessary force, the human weight. In the case of “Antarctica,” it was that intersection between the very personal and the very foreign that allowed the story to take flight.
Posted by The Story Prize at 7:00 AM