Jacob M. Appel and the Door to Eternal Life

In the second in a series of posts on 2014 books entered for The Story Prize, Jacob M. Appel, author of Scouting for the Reaper (Black Lawrence Press) discusses literary immortality. 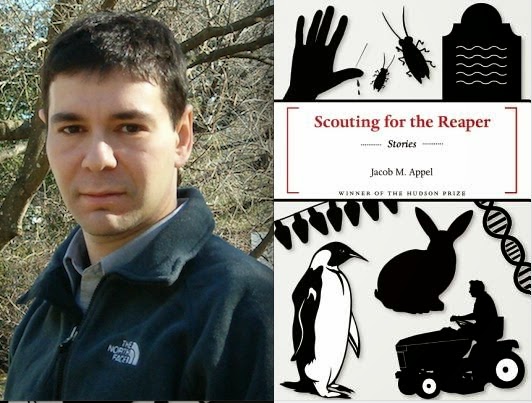 Let’s start with the bad news first: I’m dying. That’s something I’ve learned in my medical career*—always start with the worst. No patient wants to hear: “Your blood pressure looks good, your cholesterol is down, and I’m glad to see you’re keeping the weight off….Oh, and by the way, you have brain tumor.” Fortunately, in my case, the bad news isn’t imminently grim. I don’t have a rare disease likely to kill me tomorrow, or even a more common disease likely to kill me next Thursday; I haven’t been diagnosed with any disease at all, in fact, although in the spirit of full disclosure, my gums could be in better shape. And yet, there is no shaking the inevitable: One of these days, whether in five years or fifty, I will find myself as dead as Jacob Marley and Custer’s cavalry and the campaign to bring the Dodgers back to Brooklyn. (I mean no offense to anyone who is dying imminently of a rare disease—but if you are, and you’re spending your final hours reading my musings on the Internet, I strongly urge you to reconsider your priorities.)

And now the good news: You’re dying too. So we have something in common. (If you happen to be a single female who bears a striking resemblance to Sophia Loren at twenty-five, I’d like to emphasize that last part: We do have something in common.) The stark reality is that no matter how many books a person publishes, no matter how many O. Henry Prizes a writer wins, the understated fellow with the scythe corrals every last one of us in the end.

We all know this truth—although deep down, myself included, we don’t really accept it. We still believe that somehow we will prove the outlier, the one exception. In smaller ways, while leading our lives of often vocal desperation, we cling to other false hopes: that a long-lost uncle will bequeath us a mining fortune, that a girl we adored in high school will track us down in mid-life to profess her devotion, that our piddling yarns will win a prize.

So now for the better news: Fiction is both the great equalizer and the door to eternal life. Walter Mitty has nothing on me when I’m seated before my computer. At four in the morning, in my bathrobe, I can play hopscotch with the Kaiser, and free Sacco and Vanzetti, and lure Scarlett away from Rhett—although this final triumph has copyright implications. Last night, I singlehandedly overthrew the brutal dictatorships in Equatorial Guinea and Eritrea simultaneously. Jimmy Carter may have committed adultery in his heart many times, but on the printed page, my love life rivals Wilt Chamberlain’s. That cute girl I adored in high school can take a number. My uncle, who in real life wouldn’t loan me a spare mask during a sarin attack, has already transferred his fictional billions into my Swiss accounts. The magic of writing fiction is that it enables a poor sop like yours truly to reimagine the world as I’d like it to be. And there’s not a damn thing anybody else—not by boss or my landlord or even a battalion of federal marshals—can do about it. Give me a crayon and an index card, and my days are no longer numbered.

Writers don’t want immortality after death. We want it while we’re alive. Who doesn’t fantasize of showing up at one’s own funeral and announcing, “I told you so”? Or at least complaining about the beer selection. Living in a fictional world of my own creation—even if only for a few moments each morning, before I have to trade my bathrobe for my white coat—is the closest I can ever come to eternal life on earth.

* Editor's note: The author is also a physician