Jonathan Woods and The Hard-Boiled Tradition

In the third in a series of posts on 2014 books entered for The Story Prize, Jonathan Woods, author of Phone Call from Hell and Other Tales of the Damned (New Pulp Press) talks genre. 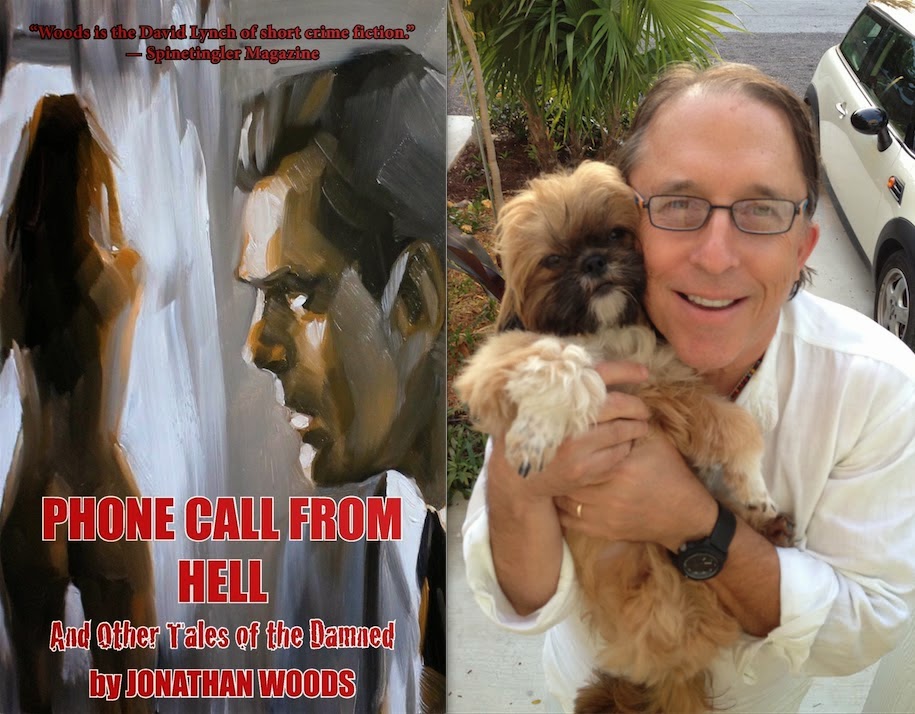 The post-modern romp, Flaubert’s Parrot, which appeared on the literary scene in 1984, made Julian Barnes’ reputation. But his two best books, published in 1980 and 1981 under the nom de plume Dan Kavanagh, are Duffy and Fiddle City. I have read each multiple times. They are crime novels.

Both books feature the bisexual ex London cop, turned purveyor of private investigator services, named Duffy. An odd duck with a gold stud in his ear, he knows his way around the seedier parts of London like the back of his hand.

Tawdry, violent, funny, politically incorrect, eccentric, sexy, well-plotted, entertaining, smart, clever, and a telling commentary on the dark side. These are the attributes of Duffy and Fiddle City. What more could you want from a book? Yet, as was recently suggested in an article in The Guardian, the Man Booker prize-winning author is ambivalent about claiming ownership of them, even as they are again in print after a long hiatus.

Is this just one more example of a “literary” type fearful of being categorized as a genre writer? A mere entertainer?

I can’t speak directly to Mr. Barnes views. “Never met the bloke,” as Duffy might say.

But a quick jog down two centuries of American writers shows Mr. Barnes’ reserve in acknowledging his charmingly off-center private eye creation to be misplaced.

James M. Cain invented the noir sensibility in his two masterpieces, The Postman Always Rings Twice, published in 1934, and Double Indemnity, published two years later. In both stories lust and obsession lead inevitably to madness and murder. Classic noir follows an ordinary person whose life suddenly tumbles out of control, bound straight to hell. Noir explores the dark aspects of the human psyche and the haphazardness and irrationality of our existence. In it are the roots of existential philosophy, which sees the world as absurd and without meaning, where bad luck and trouble can happen to anyone, anywhere, without notice.

It is well acknowledged that Camus was influenced by Cain’s The Postman Always Rings Twice when he wrote his most famous work, The Stranger, published in 1942. As Matthew Ward, who produced a new Americanized translation of The Stranger in 1988, said:

Camus admitted using an "American method," particularly in the first half of the book. He mentioned Hemingway, Dos Passos, Faulkner and James M. Cain as influences. My feeling is that The Stranger is more like Cain’s The Postman Always Rings Twice than Camus cared to admit.


Next up is Raymond Chandler, who, together with Dashiell Hammett, is credited with inventing the American hard-boiled detective story. Chandler is one of the great literary stylists of American writing in the first half of the 20th Century. His The Big Sleep is ranked #26 in Time magazine’s list of the 100 Greatest Novels in English since 1923 (the year Time started publication). Le Monde’s 100 Books of the Century lists The Big Sleep as #96.

The sensibility of noir, hard-boiled and detective fiction has inexorably insinuated itself into post-WWII American writing. Flannery O’Connor mixed murder with Catholicism in the rural South in unforgettable stories like “A Good Man is Hard to Find.” Chester Himes chronicled the American Black experience of the 1950s and 1960s in his hilarious, violent and sexy Harlem crime novels starring the Black cops Coffin Ed and Gravedigger Jones. An endless stream of lurid tales of sexual obsession and murder flowed from the pen of Patricia Highsmith, whom Graham Greene described as a "writer who has created a world of her own—a world claustrophobic and irrational which we enter each time with a sense of personal danger.” And who can forget Norman Mailer’s murderous midnight prowl of the 1960s: An American Dream.

Just as greed, lust, murder and mayhem still sell newspapers, crimes and punishment remain the subject matter of our best living writers. From the darkly ironic tales of drug smugglers, modern knights-errant, and psychopaths wrought by Robert Stone in such novels as Dog Soldiers and A Flag for Sunrise, to the pulp fiction of No Country for Old Men and The Counselor by the inimitable Cormac McCarthy, to the ambiguous and stylized noir of the young writer Laura van den Berg in her collection The Isle of Youth, crime fiction is alive and well in literary America.

So step forward Mr. Barnes and acknowledge your finest work.

Long live writers with cojones. Literary labels be damned.
Posted by The Story Prize at 2:56 PM