Susan Perabo Urges Writers to Stop Thinking About Themselves

In the seventh in a series of posts on 2016 books entered for The Story Prize, Susan Perabo, author of Why They Run the Way They Do (Simon & Schuster), offers her best advice. 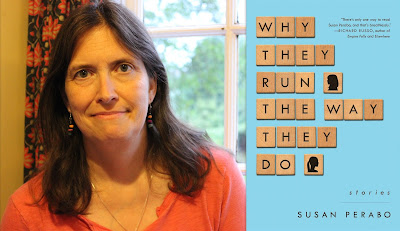 Look out, not in. If you’re a writer, you’re already prone to looking in. You’ve spent your whole life looking inside yourself. Deeply. Am I right? So stop it. Enough already. Look out.

How many times have you asked yourself, looking around these past several months, “My God, what are those people thinking?” Do not allow this to become a rhetorical question. As a writer (not to mention a person), that is precisely the question that must be answered. What are those people thinking? In some cases you will have to work really, really hard to come to even a tiny fragment of an answer, a sliver of understanding. You might have to put aside everything you know to be true, everything you believe in your heart. You have to consider this question – "What are those people thinking? "—with your slate as blank as it can possibly be. And maybe then you will get a glimmer of insight. Maybe then you can look at someone whose history and values and opinions are drastically different from your own, and you can know where their potato salad is going.

And then you go to the page. You set yourself aside. You try to be as invisible as Chekhov. You fail. Again and again, you fail. But over time you find ways to avoid your own traps, to trick yourself into non-existence. If I’m part way through a story and I stop mid-scene and think, “Yes, Susan, but what are you really trying to say with this story?” I close the document immediately and I don’t return to it until I’ve excised that question from my brain. I perform this excision not by thinking about the story as a whole but by thinking only about the characters, by tricking myself (again) into believing those characters are not my own creations, by reminding myself of the Great Lie that I am not constructing their story but simply relaying it. Instead of high-falutin’ questions about my own authorial intent, instead of attempting to decide whether I’m writing this particular tale in a tradition more closely aligned with O’Connor than with Cheever, instead of imagining what a reader might consider the “takeaway” from my story, I ask myself these kinds of questions:


And back to the story—not my story, but their story—I go.
Posted by The Story Prize at 10:38 AM