Becky Hagenston Wonders: What If?

In the ninth in a series of posts on 2016 books entered for The Story Prize, Becky Hagenston, author of Scavengers (Univ. of Alaska Press), discusses where stories begin for her and how she knows when a story isn't working. 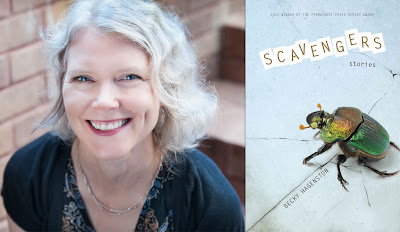 Where does a story begin for you?
More and more, my stories begin with an annoyance in my daily life followed by this general thought: Wow, it would be really weird if this other thing happened. The title story of Scavengers came about because a stranger came to my door on a scavenger hunt, which I found both annoying and presumptuous—as if I’d give some stranger a pair of red socks, or whatever it was she wanted. I didn’t have what she was looking for, but then I thought: What if she’d asked for something really specific, that only I would have? Like the diary with a gnome on it that I kept when I was fourteen and still have somewhere in a box in the closet?

A more recent story started when the electricity went off for a few hours during a storm and I was really annoyed that I couldn’t watch my nightly Netflix. And then I thought: Well, what if the Internet never came back? And what if there’s an Internet troll out there who will not know what the hell to do with his life now? It’s a fun way to start a story, because I entertain myself trying to figure out what would happen.

What do you do when you get stuck?
The best way for me to get un-stuck is to read and read and read some more. I recently read Kelly Link’s Get in Trouble and it’s such a wild book that it made my brain feel fizzy. And I love to re-read Grimm’s Fairy Tales, which are so twisted and disturbing and have lately inspired me to write some very weird stories involving toads and chopped-off fingers.

How do you know when a story you’re in the process of writing is or isn’t working?
I can tell it’s not working if I already know what’s going to happen. If I’m three pages in and I think: Oh, right, this is where it’s going, then I lose interest. I also read out loud to myself a lot, and that’s a way to tell if there’s any energy there. If my mind starts to wander as I’m reading my own story out loud to myself, then I know it’s definitely not working.

Also, there’s something about that moment just after I hit Submit on Submittable that makes me suddenly very clear-headed about what I still needed to fix!

Describe an unfinished story that you want to go back to but haven’t quite figured out yet.
I have many, many of those. I have a first sentence that I’ve kept around for years: "Two years after the town was renamed in his honor, Roy decided to move away." I really want to know what’s up with Roy, but so far I haven’t gotten any further.
Posted by The Story Prize at 8:26 AM