Debbie Graber and the Freedom to Be Foolish

In the 14th in a series of posts on 2016 books entered for The Story Prize, Debbie Graber, author of Kevin Kramer Starts on Monday (Unnamed Press), tells a whale of a story about a story about a whale. 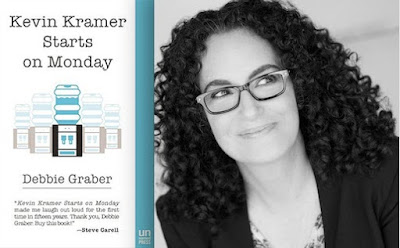 Describe an unfinished story that you want to go back to but haven’t quite figured out yet.
I wrote a story a long time ago about a killer whale. The whale’s name was Stanley, and he performed at a theme park. The park came under intense pressure from animal rights groups to release Stanley back into the wild. Things went south from there. Stanley was released and started following a group of wild orcas in the hopes of joining their pod, but he didn’t have anything in common with them. He was accustomed to life in the above water world: He had been taught by his trainers at the park to do the New York Times crossword puzzle religiously. He was up on all the current Broadway shows, and could tell the difference between a good cup of coffee and the dregs from the break room. He liked figs stuffed with goat cheese.

The wild whales couldn’t relate to Stanley at all. I had them speaking their dialogue in Chaucer-style Old English. They were a rough bunch. Picture a group of extras from Game of Thrones, only whales. They beat each other regularly with their enormous tails. They tossed sea lion pups around for fun, and then ate only their livers. They smelled really bad. Stanley was appalled by their brutality. But he felt he had no choice but to join them– this was his life now, and he had to learn to be a part of the group. The pod leader told Stanley that he could join as a junior member, but that would have to kill something first as an initiation. Stanley had pretty much convinced himself to do it, when he heard splashing and laughing nearby. He surfaced and noticed a rowboat with a father and two children out in the nearby harbor. Without hesitation, he swam toward them, knowing what he would do. He would approach, and then, from a safe distance, breach out of the water, turning a somersault. After the family stopped applauding, he would roll over on his back right next to them so they could rub his tummy. Then he would nudge their boat and they would all have a great time playing tag. He pictured the two children laughing with delight. Tears of joy sprang to Stanley’s eyes. “Finally,” he thought, “it’s showtime.” That was the end.

I workshopped this story in a writing class. People thought there were too many points of view for a short story. Some felt that the Old English dialogue was a weird choice. Many weren’t on board with the idea of talking whales. I put the Stanley story away, unfinished.

I share this experience because something about this story speaks to me. I believe there could be kernels of gold hiding just beneath the surface. Maybe a more successful story could emerge from the wreckage of this talking whale story. Maybe it’s a story about Stanley’s trainers at the theme park and their guilt over letting him go, knowing he’d never make it in the wild. Or maybe it’s a story about Stanley’s everyday life of desperation in captivity. Or maybe it’s a story where the whale dialogue is “translated” because whales don’t speak English. Hmm, not sure about that one. The point is that there are an infinite number of “maybes” in every story. It’s about which path feels right. Or less wrong.

We all have writerly instincts that shouldn’t be ignored, even if they seem to be going off the rails. Even when a story is universally panned. We cannot allow criticism to completely sway us. We must demand the freedom to be foolish. We must give ourselves the room to write stories about whales who do crossword puzzles. We must give ourselves the space to write about quiet lives of desperation. We must allow ourselves to fail, again and again, over and over. The hope is that, eventually, our patience will pay off and we will discover what a story needs. And then we will figure out what we need to do in order to write that story. And then we will write that story. Finally, it will be showtime.
Posted by The Story Prize at 12:21 PM