In the 18th in a series of posts on 2016 books entered for The Story Prize, Jodi Paloni, author of They Could Live with Themselves (Press 53), looks at stories that turn on the appearance of a stranger. 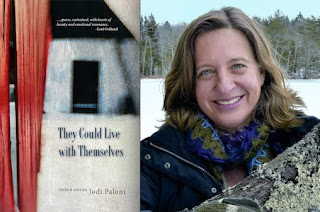 Some of my favorite stories are the ones in which the main character is minding his or her own sweet and sorrowful business when a newcomer arrives on the scene, some outsider, a stranger. The interloper isn’t always altogether unexpected, but in most cases, the impact of the “unfamiliar” is pivotal to the narrative arc. Three stories that readily come to mind are, “Cathedral” by Raymond Carver, “Pharmacy” by Elizabeth Strout, and “Where Are You Going, Where Have You Been?” by Joyce Carol Oates.

In my own writing, first drafts tend to start out as twenty or more meandering pages in which my protagonist thinks back on some tragic event. While she is beautifully conflicted, she isn’t doing anything to alter her plight. That’s when I start to think about the higher-stakes situation, both actual and emotional.


Here’s my go-to list of the good advice I’ve been given…
In “Cathedral,” a blind man, friend from the narrator’s wife’s past, becomes the narrator’s houseguest. It takes a non-seeing person’s literal limitations to expose the protagonist’s shadow side, his figurative inability to see. In “Pharmacy,” a pharmacist hires a twenty-something woman, new to town, to work by his side. Her freshness–––youth and optimism–––forms the mirror that exposes the protagonist’s struggle, a waning life alongside an embittered wife. In “Where Are You Going, Where Have You Been?,” the character traits in the antagonist are twisted and heightened to the extreme so that the protagonist, a teenage girl who is in acute want, can bump up hard against her alter ego.

Contradictions interest readers. Employment of a stranger–––as shadow, as mirror, as anima/animus, the Jungian flip side of a previously unrevealed subconscious–––may bring on a full range of impact. But what intrigues me the most about the device is how the stranger, in the end, is not so very strange, but instead becomes something quite recognizable in the protagonist.
Posted by The Story Prize at 11:23 AM