In the 19th in a series of posts on 2016 books entered for The Story Prize, Matthew Neill Null, author of Allegheny Front (Sarabande Books), discusses an underrated author. 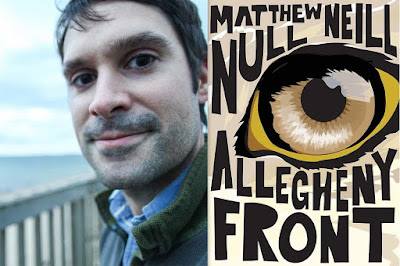 The American readership of Lars Gustafsson is minuscule but adoring. Stories of Happy People, his best book, was first published in his native Sweden in 1981 and released here by New Directions in 1984, year of my birth. Stories of Happy People: of course the cover is a monochrome of a marvelously bleak tundra landscape, a white river snaking through blackness, devoid of any human life but the tiniest suggestion of a hut on the skyline.

According to the jacket copy, several stories explore “the protected, private universes of the mentally retarded, the insane, and the senile.” While not quite politically correct from the vantage of 2016, this line strikes at what makes it such an incredible work. Gustafsson treats the cast-off of society with wonder, seriousness, and awe. He was a philosopher as well as a novelist. It shows. When asked about his practice, he answered with a studied indirection: “A rabbi once told me that when God spoke to Moses in that bush, it wasn't in a thundering voice; it was in a very weak voice. You have to listen carefully for that voice. You have to be very sharp.”

Frankly, a “very weak voice” is an overstatement for what inspires his best; these characters are often speechless and convey, if anything, a pulsation of thought. Gustafsson seems able to hear thought from the voiceless. He is tuned to the frequency. Their silence is speech:

What [the boy] could remember of [school] afterward was that it was where he first smelled a smell that would later become very familiar to him: the smell of scouring powder and disinfectant, the smell of hospitals, the smell in the waiting room at the country doctor’s, strong in some places and weaker in others, but always the same, varying in one way or the other: the smell of those who wanted something from him.


This story, “Greatness Strikes Where It Pleases,” is a stirring example. An unnamed boy lives on a farm in Sweden—he is, what we once called in West Virginia, "feeble-minded." I could speak of isolation, of derealization, and I’m tempted to explicate at length and roll out the block quotes—on his mushrooms and leering saws, his fear of the birds that are “a corner of the cloth of the world which had worked loose and started to flutter,” his blood knowledge that those who master language have mastered other beings—but let me hold back. Just read it.

Not that I could give away "the plot." Nothing much happens. Unable to learn language, the boy is sent to The Home, a place for those like him, for the rest of his life, except for the mild interruption of World War II. He putters about the dormitory, the garden, the woodshop. He learns to masturbate, perhaps the great pivot of his life. He rakes leaves. He grows heavy. He slowly explores his physical surroundings and his interior topography, which grows stunning and as intense as a mountain range and will make you wonder about any mute human life you’ve overlooked. In later years, he spends increasing time in a chair, admiring the shifting qualities of light, understanding.

Here, I must pause to say I admire Gustafsson’s stories because they run counter to the machined, soulless products of so many MFA workshops. The so-called "rules" are broken. “Greatness Strikes Where It Pleases” has no dialogue and little in the way of causality; it overturns the old saw of "show, don’t tell," and we are "shown" almost nothing; instead of relying on scenes, the sense of time is conditional, subjunctive, reveling in prolepsis; the narrator is unapologetically omniscient; we plunge from the concrete to the abstract and vice versa:

In the wombs of the mothers, unborn embryos were growing, membranes and tissues folded and pleated themselves cleverly around each other, exploring without sorrow, without hesitation, the possibilities of topological space.


Can you imagine trotting this out to a writing workshop? It is incredible, and it would be pilloried. As American writers, we have become fearful, fretful. We fear speaking with authority. We flinch. We are afraid of knowing, of presuming what others think, feel, experience. But this is not a vocation for the fearful.

“Greatness Strikes Where It Pleases” surprises, unsettles, and breaks new ground. I’ve read it a dozen times, I’m still grappling with what it means, and I may never know, which is its crowning glory.
Posted by The Story Prize at 6:15 PM