Orlando Ortega-Medina Taps Into His Subconscious

In the 14th in a series of posts on 2017 books entered for The Story Prize, Orlando Ortega-Medina, author of Jerusalem Ablaze (Cloud Lodge Books), discusses the messy process of writing his first drafts. 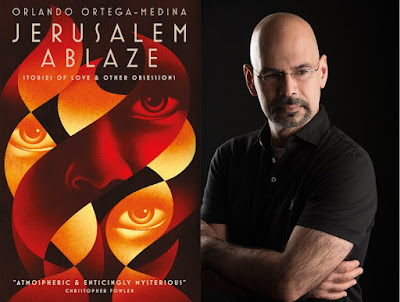 How do you approach writing a first draft?
I’ve always found that accessing my subconscious is the most critical aspect of my writing of any first draft of literary fiction. Tapping into this dark, bottomless reservoir as a primary source is more important for me than any character study, plot outline, or clever turn of phrase.

Why do you consider this subconscious approach to be more critical than the traditional “conscious” methods such as plotting or outlining?
The only way for me to be productive at this early stage is to try and disconnect myself from my internal edito—the cause of most writer’s block in my view—so as to vomit a first draft onto the page. I deliberately use the emotive verb vomit to emphasize that a first draft is meant to be messy, elemental, something out of which to eventually fashion a story. It is not the story itself. In my case, it is only after I’ve poured out the stuff of my subconscious onto the page that I revisit what I have written—with the merciless mind of an editor—and commence the revision process that will ultimately refine the story into something publishable.

Do you have any special method for accessing your subconscious?
In my student days, I employed various techniques for plugging into this source, including sleeping with a notepad on my nightstand to record my dreams upon waking for use as a story starting point, isolating myself in a room with Philip Glass (or similar) playing in the background and writing the first thing that came to my mind, driving to the desert and writing longhand in the shade of a Joshua Tree, or even depriving myself of sleep for several days and then writing nonstop for hours - something I understand David Bowie did when he wrote his seminal album, Aladdin Sane. These days, I necessarily take a more practical approach – something better suited to my workaday schedule as a lawyer: I set my alarm two hours before the official start of my day. When the alarm jars me awake, I roll out of bed half-asleep, proceed directly to my dedicated writing space, and spend the next two hours writing non-stop. I literally wake up in front of my computer as I write.

Are you saying that you never know what you’re going to write in advance?
Not exactly. Writing off the top of my head doesn’t mean I don’t have a story blueprint in mind. I sometimes use my two hours of writing to dream up a storyline that I will use as inspiration for a later writing session or, perhaps, to invent a protagonist’s biography and family tree, or to write a protagonist’s backstory. The beauty of the process at this early stage is that there are no rules; so there are no mistakes. Everything is about the writing, digging deep and pulling a story out of myself, learning about my characters as I write about them, never doubling back, pushing the narrative forward come what may, and then setting aside what I’ve written for another day—after I’ve written the word END.

What role would you say your subconscious has played in the composition of your stories? Is there something particularly dark inside of you that you’re working out in them?
There’s something dark inside all of us—some more than others, of course. Many of us, however, suppress the very idea that we have a dark side, as if admitting to this will somehow make us worse human beings. It’s the same mental game many of us play when it comes to the subject of death. We’re all marked for death, but we do everything we can to avoid thinking about it. In my view, hiding from something that is so close only makes us more vulnerable to it when it inevitably asserts itself. When it comes to my fiction, I draw from the dark part of my subconscious the raw material I need to tell my more dramatic stories. When I’m successful, writing that first draft is both creative and therapeutic. Put another way, I‘ve chosen to work out my dark side in my stories, casting out my demons on paper. Once all my demons are gone, I imagine I'll have nothing left to write. That's both my greatest hope and my greatest fear.