In the 18th in a series of posts on 2017 books entered for The Story Prize, Rob Davidson, author of Spectators (Five Oaks Press), discusses writing stories in response to the work of visual artists. 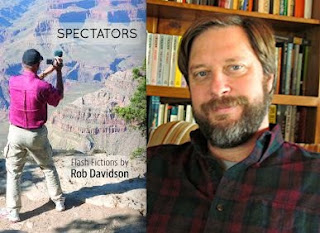 What inspires a new story? It can be anything—a fleeting glimpse, an overheard bit of gossip, a memory. Sometimes it’s another work of art.

The stories in Spectators began as ekphrastic exercises. Ekphrasis, a Greek word meaning “description,” is a literary response to an artistic production, typically a piece of visual or conceptual art. The resulting story, while inspired by the work of art, is not mere summary or objective description. The best ekphrastic works are richly subjective, presenting idiosyncratic responses that could only have been penned by a particular writer. There are countless examples, from Rilke’s “Archaic Torso of Apollo,” to Anne Sexton’s “The Starry Night” (inspired by Van Gogh), to Juan Felipe Herrera’s “Exiles” (inspired by Edvard Munch’s "The Scream").

Many of the flash fictions in Spectators were inspired by the photography and visual art of Stephani Schaefer, Sara G. Umemoto, and Tom Patton. The process is simple. In each case, I sit with the chosen image, studying it intensely before beginning composition. This might involve minutes or hours. Only when I feel I have fully entered into the world of that image do I begin to write. It begins as a kind of dialogue, with me going back to the image frequently. Eventually, I quit looking at the image and focus solely on my text, which develops its own dreams and aspirations.

Naturally, some readers want to see text and image side-by-side. When it happens, the experience is powerful. Tom Patton and I mounted a joint gallery show at the Morris Graves Museum of Art in Eureka, California, in early 2017. Seeing Tom’s excellent photos paired with my flash fictions, printed as broadsides, was grand; we both saw our own work in a new light.

So why not do a book together? A couple of reasons. First, not every fiction in the book is in response to visual art; some are homages to other writers, like Borges, Virginia Woolf, and Henry James. Second, I always intended the fictions to stand on their own merits. Seeing the image alongside the text I wrote might be interesting, but I don’t consider it essential.

I wrote these flash fictions to challenge myself to do something new. After three published books, I am a mid-career author who has learned he’s good at some things. There is a certain temptation to keep doing those things because you think you know what you’re doing. And there is another temptation to challenge yourself to cross lines, to cultivate what the Zen Buddhists call shoshin, which means “beginner’s mind”: an openness to new things; a willingness to try those things; an eagerness to learn; and the absence of preconceptions. Let go of the presumption that your wisdom counts for something. Look anew, as if for the first time.

While drafting Spectators, I had a few rules in mind, rules I made for myself solely for the reason of cultivating a beginner’s mind: to dispense with plot (go ahead, try it); to be more lyric and less narrative; to experiment with genres other than realism; to make each piece a response to another work of art; and to write nothing longer than a page.

It all started with those wonderful images by Stephani, Sara, and Tom.
Posted by The Story Prize at 9:12 AM