In the 15th in a series of posts from authors of 2018 books entered for The Story Prize, Matthew Baker, author of Hybrid Creatures (Louisiana State University Press), finds an unlikely source of inspiration. 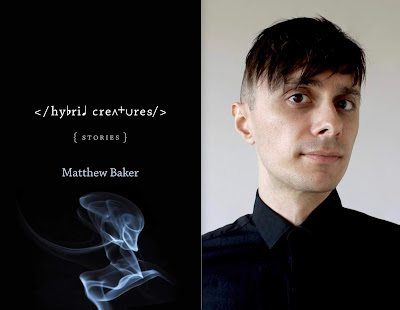 Before writing the stories in Hybrid Creatures, I wrote three prototype stories. Like the final stories, the prototypes experimented with artificial languages: HTML, math notations, music dynamics, and propositional logic. Yet in terms of narrative, the prototypes had nothing in common with the final stories whatsoever. The plots were different. The characters were different. The settings were different. I hadn’t planned on writing prototypes, but experimenting with artificial languages narratively proved to be an extraordinary challenge, and each of those first attempts was a failure. No matter how much I wrestled with it, I couldn’t figure out what was wrong.

The breakthrough came in February 2013. For anybody following the hacker world, that past year had been chaos. The LulzSec hacker Sabu had turned informant for the FBI, leading to the arrests of nearly every member of LulzSec, including Jeremy Hammond. Barrett Brown had been arrested. Commander X had chosen exile over incarceration and had fled to Canada. Julian Assange had taken asylum at an embassy in London and seemed just as trapped there as he would have been in prison. Aaron Swartz had committed suicide in Brooklyn the month before. If hackers were satellites, it was like a night when satellites suddenly began to fall from the sky, one after another in bright blazes of light. It was astonishing and somewhat frightening to behold.

I spent a lot of time thinking about those hackers, especially after Aaron Swartz died. At the time, I was living in Dublin, Ireland, in a drafty studio in an old townhouse. A fox lived on the roof of the shed in the backyard; at dusk, as I was cooking dinner and the fox was climbing down from the shed to go hunt for supper, we would always give each other a glance through the window before returning to our chores. That night, though, I wasn’t there for our ritual—I was at a lecture at a museum until long after dusk. Walking back in the dark, stepping between puddles, I noticed that the fox was running alongside me, slipping from bush to bush in the yards next to the sidewalk. I don’t know why I remember that detail so clearly, but I do: that fox keeping pace with me at a distance, as if it felt a compulsion to guide or protect me.

When I got home, I turned on a lamp and heated some milk in a pot and made a mug of cocoa, and then sat down at my computer to get online. On a sudden impulse, thinking about Jeremy Hammond, I clicked over to HackThisSite, the hacking website that he had founded in 2003, offering free and legal “missions,” or training exercises, for hackers “to test and expand their hacking skills.” I hadn’t been on HackThisSite in nearly a decade.

I had already written the prototype narrated partly in HTML. But writing the prototypes, I had been thinking about the experiment solely in terms of language. By forcing me to analyze the source code of different web pages, the training exercises on HackThisSite got me thinking about structure. I suddenly realized, in a flash, that a webpage had the exact same makeup as a human—every webpage consisted of a “head,” which contained data that wasn’t displayable, and a “body,” containing the data that was displayed—and that in the same way that a story could be told in the form of a diary or a letter or a series of newspaper articles, a story could also be written in the form of an HTML document, with that exact same structure that a webpage had.

By extension, I realized the potential for the other languages to be paired with corresponding structures, too: that the math story could be divided into two sections that in terms of word count would have the approximate proportions of the golden ratio, that the music story could be arranged into four movements that in terms of thematic development would have the traditional composition of a classical symphony, that the logic story could take the form of one long philosophical proof. The realization gave me goosebumps. It took me another three years after that night to write the stories and finish the collection, but that was the moment that the book finally took form in my mind: while doing training exercises on a hacking website that had been founded by somebody who was now in federal prison. If I could, I’d thank him, but he’s still there.
Posted by The Story Prize at 9:48 AM