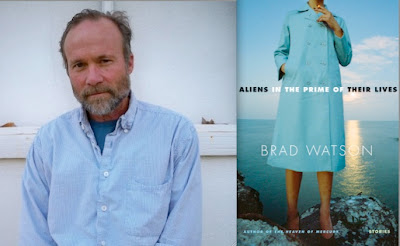 In the sixth in a series of posts on 2010 short story collections entered for The Story Prize, Brad Watson, author of Aliens in the Prime of Their Lives (W.W. Norton) answers a few questions a bout how his book came together.

Describe one of the stories in Aliens in the Prime of Their Lives.
In the title story, a teenage couple (17 yrs. old) elopes and, with the girl pregnant, set up in an attic apartment a block from the local mental hospital. The night they tell their parents about the elopement, they're visited (very late) by a man and woman wearing mental hospital pajamas, who have broken in somehow and who claim to be aliens from another planet inhabiting the bodies of the mental patients. This is a darkly comic scene. After the narrator says they look familiar, they explain that the bodies they're in used to be a movie theater hostess and a homicide cop, institutionalized for drugs and depression, respectively. Before they leave, they ask the narrator -- the young man -- if they can have the baby when it's born, so that they can "take care of it." After this visit, things become very strange for the young couple and before long their plan to be married and keep their child falls apart.

I won't reveal more of the plot, but I will say that, as far as I'm concerned, there are aliens walking around inhabiting the bodies of people in these stories, messing with their lives for experimental (and, possibly, entertainment) purposes. Several critics have written about "a couple from the local mental institution who may or may not be aliens from another planet." I don't understand their reticence. Are they embarrassed for me that I would do a little playfully dark genre mixing in here?

What is your writing process like?
Get to it as early as possible in the morning, before I can think too much about the size or apparent impossibility of the task sitting there unfinished. If a novel or story is being stubborn with me that day (that is, if my brain is being stubborn or obtuse concerning that story), I don't push or hack at it too long; better to work on something else -- fiction, nonfiction, even poetry (though I'm no good at it aside from the occasional individually decent line) until my mind loosens up and lets the original story or novel back in. I always have several things in progress and can't seem to take a more methodical approach: finish this before you even think about starting that, lash yourself to this mast and ride out the storm, etc.

When I try that more "disciplined" approach I just end up writing a lot of bad prose that clutters the pages and my sense of what really ought to be on the page, instead. Better to let my mind work on it on its own for a while as I write decent pages on something else. Progress is made, even if it zigzags a lot along the way. If I didn't have several things going at once, I'd spend a lot more time just sitting there sighing, wanting to drink before five. So this is my writerly vice turned attempt-at-virtue.

At what stage do you start seeking feedback on your writing?
Certainly not until a first draft is finished and ideally not until I think it's fairly polished (at least two and maybe several drafts) but I'm uncertain (because I'm so close to it, yet still unable to establish enough critical distance to be certain) about the level of quality there.

Do you do research?
Depends on the story or novel, of course. Sometimes, as with "Alamo Plaza" in this collection, the research is simply into my own memory of a place, or asking questions of others who remember the place. I found a picture of that particular motel on the Internet. For the title story, I looked up popular notions of potential future space travel and possible forms of alien life that were floating around in the 1960s and early 1970s. For my novel, The Heaven of Mercury, I read a good bit of local history about my hometown and the Alabama gulf coast, mostly anecdotal. Also I gathered stories from my grandmother and other relatives about life in the 1920s and '30s.

For a novel I'm working on now, I'm reading books and old newspaper articles about the desegregation of public schools in Mississippi in 1970. I'm taking a more methodical approach to this research than I have other work in the past because that information is more germane to the plot than research has been for my past work.
Posted by The Story Prize at 9:21 AM