Keith Lee Morris' Call It What You Want: Inspired by the Id and ID 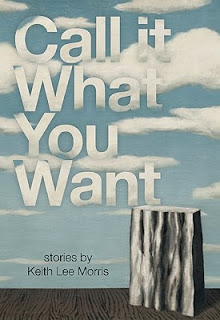 In the fifth in a series of posts on 2010 short story collections entered for The Story Prize, Keith Lee Morris, author of Call It What You Want (Tin House) answers a few questions about how his book came together.

How long did it take you to write Call It What You Want, and how did the book take shape?
I started out with the idea that I was going to publish an entire collection of stories based on dreams. I figured . . . what . . . maybe 50 or so would do it? It would be called 50 Dreams. Crazily enough, I did manage to finish about 40 or so, many of them no longer than a few pages. My working mode was this: I would dream something at night, then when I woke up (often in the middle of the night), I would just start free writing based on some small detail from the dream and try to get it turned in the direction of a narrative. That was pretty much the whole program, other than that I also wanted the stories to retain the feel of dreams—a kind of dream logic that the stories adhered to.

At any rate, eventually a bunch of more realistic stories started to insinuate themselves—I was writing some things like “Testimony” that I felt good about, and I started to talk myself into including them. So the finished product is really a movement from stories that draw the reader into a fictional world that resembles the real world as we commonly think of it into a world that seems more like the world of dreams. Stories in the middle of the collection have a foot in both worlds, I think, and then toward the end (“My Roommate Kevin Is Awesome,” e.g.) they get pretty absurd, and then finally they take a swing back the other way, in part. The final story, “The Culvert,” is for me a kind of “down the rabbit hole” story; it’s about a father who can’t get over the death of his son and then finds his son in an unexpected way, in an unexpected place that may or may not be real—the point is that to the father it doesn’t matter. Call it dream, call it reality, it’s the reconnection to the son that matters. That’s where the title comes from. That and the fact that we really couldn’t figure out what to call it, so I told my editor at Tin House, Tony Perez, to call it whatever the hell he wanted to. Then we decided that was a pretty good title.
Are the stories connected in terms of content?
A lot of them take place in Idaho*, where most of my fiction is set. A lot of them involve characters struggling along in the cultural margins—those are the characters I tend to find most interesting and maybe the ones I know best. My wife says I make too big a deal of being from Idaho, like I use that for a default excuse to explain all my shortcomings (my lack of fashion sense, my inability to determine the proper utensils to use when I go out to dinner, my tendency to blurt out things that make me sound like an asshole or an idiot), but I AM from Idaho. My best friends are still my friends from Idaho. That’s my point of reference. Nowadays I work with colleagues who grew up on the East Coast and went to Ivy League schools and I generally have no idea what they’re talking about. It’s not that I don’t find them interesting, it’s just that I wouldn’t have a clue how to begin writing about them.
What is your writing process like?
Really really really really really haphazard. I go weeks, months, years without writing much of anything. Then I’ll get obsessed with a project and finish it rather quickly. And there’s not much rhyme or reason—or at least not much consistency—when it comes to my approach to writing fiction. I usually have an idea that I’ll start working from, and that idea is usually a combination of character, plot, and theme, and I usually have a sense of whether I’m beginning work on a short story of something longer, but after that initial stage things go haywire. Here’s one thing I believe strongly when it comes to my own work (I don’t pretend that it should apply to someone else)—the material should dictate the process, not the other way around. In other words, every piece of fiction for me is different, and therefore each piece of fiction deserves its own approach. I disagree with people who say that it’s the fiction writer’s job to find his or her own “voice”—each individual story has its own voice. The “voice” belongs to the story, not the author. It’s my job to find the correct voice with which to tell the story.
What do you like about the short story form?
Probably the same things other people say. The gratification (if there is any) is more immediate than with a novel. There’s a purity of line sometimes with a short story, a feeling that you’ve found one particular musical phrase (of a sort) and held it. Novels are messier, almost always. It’s nice sometimes to feel that the emphasis is on a concentrated effect rather than a larger scope, bigger palette. That said, I really do prefer working on novels most of the time—I like being in for the long haul.

*Idaho's postal abbreviation is ID.
Posted by The Story Prize at 2:12 AM