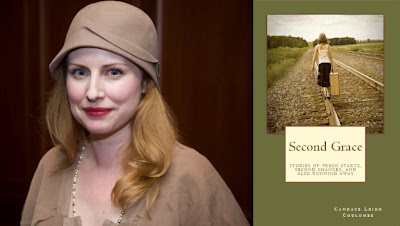 In the eighth in a series of posts on 2010 short story collections entered for The Story Prize, Candace Leigh Coulombe, author of Second Grace, answers a few questions about how her self-published collection of stories came about.

Describe one of the stories in your collection.
Without getting overly sentimental, it’s hard to pick one! But, “The Gulf of Aden” has a soft spot in my heart. It’s the story most recently written, so it still feels new. I think of it as “The Pirate Story,” which would have perhaps been a better name. I had read a newspaper article about the precautions some cruise lines were taking when sailing through the Gulf of Aden, and I wondered what would happen if they didn’t take any. In the story, a woman with newly acquired and fleeting wealth joins jaded upper-class passengers for a cruise through the troubled waters of the title. The ensuing adventure is not how she imagined the good life to be, but it gives the others good cocktail anecdotes for the cruises to come.

This is how it begins…

"Sugar was freckling in the sun. Even after two weeks at sea, she still didn’t resemble her bronzed shipmates. They were uniformly tanned, drawn taut, bleached, waxed, capped, and shellacked. Their bodies made unnatural angles as their linen shirts and dresses billowed in the breeze. Sugar wore the requisite oversized sunglasses of their class. With her name, she could be one of them. Cricket, Tinsley, Muffy, Sugar. It was either a socialite’s name or a stripper’s. You just had to take the context clues. She had never been able to live up to one or down to the other until recently. "

Like many of the stories in Second Grace, “The Gulf of Aden” speaks to class aspiration. Culture, socio-economics, and gender play roles in my characters’ opportunities and desires to have a second chance. The stories cross genres: horror, historical fiction, romance, suspense, drama, comedy, fantasy, and even political satire. But, they’re told in the only aching, and hopefully literary, way I know how to tell them. And, they’re each 2,500 words or much less.

What is your writing process like?
I wish I was one of those writers who couldn’t wait to get cracking every morning. Usually, I’m not as fond of writing as I am fond of having written. When I have an idea, I try to work out the potential problems before even sitting down. There are the practical matters, such as story length, location, object, and genre; there’s the theme; and there’s the inspiration. I really appreciate having a “green fairy” in the form of a painting, song, or poem to thread through the tale. I hope that I write a pleasurable read which, upon further reading or reflection, unravels deeper meaning. I love the challenge of communicating complex themes in lush language, despite the fierce economy of words. That being said, I’ll write a story over two days, give or take. Thanks to modern computers, I edit as I go, and once I’m done, I’m done. I’m sure it’s an anathema to English teachers everywhere, but I read it through for grammar and continuity, and that’s about it.

What kind of research, if any, do you do?
The telling is in the details. I research books and news accounts and such to inform my sense of regionalism and sense of era. With historical fiction, I aim for accuracy even when the narrative veers quite fantastical. I particularly like using archives of The New Yorker and The New York Times.

Describe a technique you've learned from other narrative or non-narrative forms of expression.
I like to cook. I don’t know that I’m particularly gifted at it. But, I like putting on a flowered apron and doing my best impression of domesticity. What food has taught me about fiction is that everything must be purposeful. I want a riot of color and scent and flavor. Nothing should wasted, nothing forgotten. A good story should be a sensory experience, like a good dish. And a good collection, a meal – everything thoughtfully, lovingly prepared.
Posted by The Story Prize at 6:51 AM