In the 36th in a series of posts on 2011 short story collections entered for The Story Prize, Brian Doyle, author of Bin Laden's Bald Spot & Other Stories (Red Hen Press), discusses influences as diverse as Robert Louis Stevenson, The King James Bible, and his children. 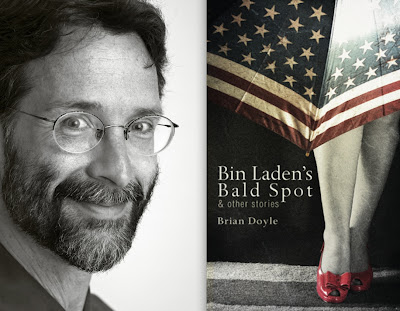 Which story in your collection required the most drafts?
Probably “Pinching Bernie,” a story about some Boston guys who know some guys going to Rome to kidnap His Eminence Bernard Cardinal Law, late of the Archdiocese of Boston, from where he is hiding out in a Vatican City church, to bring him back to Boston for their own quiet justice, which is not what you think. I really wanted the right tone for this – just enough possibility, rage, humor, punch in the heart – and I tinkered with it until I thought I had the right mix of fury, reasonable nonsense, rant, and fantasy. Rantasy.

At what stage do you start seeking feedback on your work and from whom?
When I think I am finished with a piece I show it to the woman who married me, who is the most glorious perfect First Reader of all time because she couldn’t care less about literary stuff and style and lyrical passages and shimmering tone and subtle craft and other muck like that; all she cares about is if there’s a good story there, fiction or not. The kiss of death from her is that’s nice, and the greatest compliment is o my god. I shoot for o my god. (Sentence of the day, so far.)

What do you think a good short story collection should deliver?
Worlds. Moments. A look through a crack in a door you never even imagined in the whole possible universe of doors. A suggestion of worlds way beyond not only this world but the world of the story – a great story gives you the impression that the world of the story is so real that the characters keep going past the end of the story and you only visited a moment. A punch in the heart. A glimmer of what if. A shiver of What It Is beneath the words we use for What It Is.

Is there a story collection you consider your ideal of what a collection should be?
Collections are uneven by nature; no one can write a great story every time out, not even a Mary Lavin or Flannery O’Connor; but there are some collections I read again and again for their quality, their joy and power even when they are sad, their unforgettability – Flannery, of course (maybe the finest female writer in American history, period, eh?), Julia Whitty’s A Tortoise for the Queen of Tonga, Frank O’Connor’s Guests of the Nation, Stevenson’s The Merry Men, Tim Winton’s The Turning, Sherwood Anderson’s Winesburg, Ohio, the Great Frog Hunt chapter of Steinbeck’s Cannery Row. And the Old Testament, the greatest collection of lewd and bloody short stories ever, which is best to read in the King James Bible translation, all thorny and prickly and shouldery language o god I love it, although the Newer Book is better, the greatest quest novel ever. On the Dusty Road, by four guys who were better poets than Kerouac.

What book or books made you want to become a writer?
E.B. White’s essays, especially One Man’s Meat – you mean Literature can be like talking? Cool! Cannery Row and Sweet Thursday by Steinbeck, and Flannery’s stories – you mean Literature can be funny and real, not snuffy and confusing and top heavy with symbols of sex and death? Yessss. Kon-Tiki by Thor Heyerdahl – you mean you can write beautifully and entertainingly about fun stuff? It doesn’t have to be all neurosis and adultery like Updike? Robert Gibbings’ books – what, you can write like an angel about boats? and illustrate your own books? Cool! Jim Kjelgaard. Twain. A.J. Liebling. More than anyone else, Robert Louis Stevenson, who I think was the first writer who made me realize you could be funny, and interesting, and poignant, and angry, and delighted, and hilarious, and real, and you could imagine anything, and write with dash and verve and brio, it didn’t have to be Heavy Literature, it could be Wild Stories! Huge epiphany. I don’t think I ever really recovered from that.

If you dabble in any other non-literary forms of expression, what do you do and how does it inform your work?
I am a dad, a dad, and a dad, and being a dad has done more than anything else on this bruised and blessed earth to make me a better writer – having kids underfoot and loving them and roaring at them and listening to them made me pay attention a thousand times more, made me a thousand times more absorbed in the wrestle and stutter and song of language, shredded any ego and arrogance I might have been building up, made me attend to the power and immediacy of story, and lose all the snuffy sniffy artsy aspects of writing, and I was really looking forward to being fatuous and self-absorbed, too. What a bummer. I was even going to smoke a pipe.