Greg Hrbek on Writing in an Unreal Vein

In the 33rd in a series of posts on 2011 short story collections entered for The Story Prize, Greg Hrbek, author of Destroy All Monsters (Bison Books), discusses the inspiration for his book. 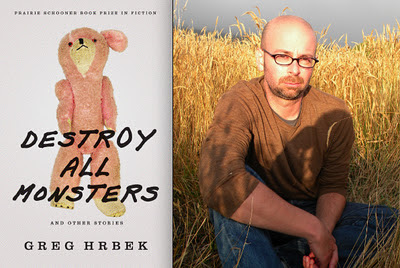 I don’t have a notebook filled with ideas. I don’t get that many—at least not many worthy of dramatization. My first book was a novel; and I was worried back then that I’d never come up with enough ideas to sustain a writing life. So I’m surprised I wrote the ten stories in this collection. The way I did it was by finding a fundamental concern that I could explore from different angles, which turned out to be parenthood. Only one of the stories approaches this subject realistically. The rest are, to varying degrees, unreal.

I never thought I’d write “fantastic” stuff. I read The Canon in college and pretty much nothing else. The book that changed how I wanted to write was a novel by Scott Bradfield called The History of Luminous Motion. The oldest story in my collection, “Green World” (about a boy on death row in some kind of alternate universe America), was inspired by that novel, which only later did I realize must have been inspired by Steven Millhauser’s Edwin Mullhouse.

Of all contemporary story writers writing in an unreal vein (two of my favorites are Judy Budnitz and Shelley Jackson), Millhauser was the guiding light for this collection. I don’t think there is another living writer who achieves, on the page, a truer sense of flotation between reality and dream. It seems to me you have to go back to Kafka to find such perfectly-struck balance. So my hope is that I wrote some stories which, like little pieces of glass, reflect some of that brilliance.
Posted by The Story Prize at 8:22 AM