Story Prize intern Phedra Deonoarine recently caught up with Louise Steinman, one of this year’s three judges for The Story Prize (along with Sherman Alexie and Breon Micthell). Steinman is the curator of the award-winning ALOUD reading/conversation series for the Los Angeles Public Library, and co-director of the Los Angeles Institute for Humanities at USC. She is the author of the memoir The Souvenir: A Daughter Discovers Her Father’s War — selection of several all-city reads programs— and The Knowing Body: The Artist as Storyteller in Contemporary Performance. Her articles and reviews are published widely and her essays have been anthologized, most recently in The Devil's Punchbowl: A Cultural & Geographic Map of California Today. She is also a contributing editor at The Los Angeles Review of Books.

Phedra Deonarine: What led you to your role as a curator for the ALOUD reading and conversation series at the Los Angeles Public Library? 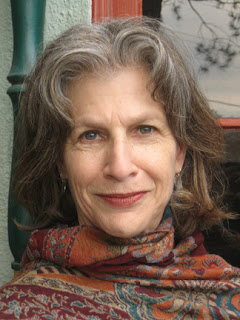 Louise Steinman: Many things! I studied literature at Reed College, wrote my thesis on poet Robert Creeley. The Beat poet Lew Welch was a mentor. Took a slow bus to Naropa Institute (Jack Kerouac School of Disembodied Poetics) in 1976-- studied (and later performed) with Meredith Monk. For ten years I co-directed a performance company, SO&SO&SO&SO, based in Portland, Ore. I explored my own family stories through a theater of images and movement. My first book, The Knowing Body, is subtitled “The Artist as Storyteller in Contemporary Performance.” My graduate degree is in interdisciplinary arts. I'm interested in thinkers and writers and visionaries of all kinds.

And then there’s the element of luck. The Library Foundation of Los Angeles was looking for someone to create and produce public programs back in 1993, when the (rebuilt) Los Angeles Central Library reopened after a series of disastrous arson fires. I was in the right place at the right time; though in the beginning, I didn’t think I’d last six weeks.

That was eighteen years ago this fall and now we’ve presented over 1,000 free programs.

PD: How does you work as a writer relate to your work as a curator?

LS: My own work as a writer frequently explores memory and reconciliation. That interest is reflected in some of my choices for ALOUD. We recently hosted Leymah Gbowee, the Liberian peace activist. That same week she won the Nobel Peace Prize. Last week we presented Karl Marlantes, author of the great Vietnam war novel Matterhorn. His crucial new book is called What It is Like to Go to War. My own memoir, The Souvenir: A Daughter Discovers Her Father’s War, was an investigation into my father’s experience in the Pacific War and how it shaped our family life in Culver City, Calif., in the fifties. Marlantes writes about how we need “ceremony and counseling to help returning veterans move from the infinite back to the finite.” I’m concerned with the issues our returning vets now face. I’ve led writing workshops for veterans at the library. As Marlantes notes, by writing a story, one can take oneself by surprise, get past the usual defenses.

Reading is crucial to my life as a writer and also as a curator. My idea of heaven as a kid was to take a book and climb the neighbor’s Chinese elm and hang out there reading for hours. Reading is also part of my job. I’ll spend a day reading Alexandra Fuller before I interview her; or immerse myself in the work of poet Adam Zagajewski or Joan Didion before writing my introductions. It’s tonic for my own writing.

PD: The Web site for the ALOUD series offers a wealth of author podcasts. Which ones stand out for you and why?

LS: The program on "The Short Story and the Art of Unknowing," with Sarah Shun-lien Bynum and Yiyun Li—moderated by Bridghe Mullins—is excellent. Carlos Fuentes is another good one—his grasp of world literature is so wonderful. I loved the program with poet Jane Hirshfield and physicist Sean Carroll on "The Nature of Observation" because they're each both canny and open about the differences and possible overlaps in how they view the phenomenal world. Our recent program with Anita Hill on the 20th anniversary of the Clarence Thomas hearings was very moving. Howard Rodman's interview of John Sayles makes for great listening. Danzy Senza and Attica Locke talking about "Navigating History: Truth in Fiction" was excellent and Michael Silverblatt's conversation with Marilynne Robinson unfolds in surprising ways. If you listen to the Isabel Allende podcast you'll hear her erotic dream about Antonio Banderas in a tortilla. (There's guacamole involved as well.)

PD: What are you hoping for from the three short story collections that will  be the finalists for The Story Prize?

LS: I love that feeling of being so deep in a story that you don't want it to end. I love when I enter a world that is familiar and yet strange. I love when I love a sentence or a paragraph so much I have to wake my husband up in the middle of the night and read it to him.  I love when a story haunts me for days on end.