In the ninth in a series of posts on 2012 short story collections entered for The Story Prize, Alix Ohlin, author of Signs and Wonders (Vintage), reveals the source of one of her stories and expresses her preference for working anywhere but at a desk. 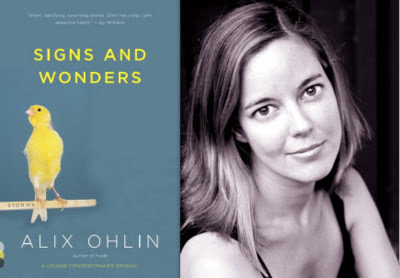 What made you want to become a writer?
I never really wanted to be anything else. I grew up reading, and the world of books was always where I felt the most at home, so it made sense that I’d try to find my own place there.

What obstacles have you encountered in your work, and what have you done to overcome them?
My biggest obstacle is always self-doubt, the voice in my head saying this is no good. The only way I’ve found to overcome it is to write a lot and often. It seems to take the pressure off—if what I write today is not good, then I know there’s always tomorrow, and the day after that.

What's the shortest time it has taken you to write a story?
A day. A couple of my stories (like “Simple Exercises for the Beginning Student,” from my first collection) have appeared complete in my head, and it felt like all I had to do was write them down.  I hasten to add that this doesn’t happen very often.

What's the longest time it has take you to write a story?
Ten years. I wrote a draft of my story “Edgewater” and set it aside, then came back to it a decade later and tried again.

If you've ever written a story based on something another person told you would make a good story, what were the circumstances?
I usually hate it when somebody says to me “this would make a great story!” I just automatically rebel against being told what to do. But one day I was getting my hair cut and the hairdresser started telling me this long story about one of his other clients, a woman who was just about to divorce her husband when he became extremely ill, so she had to stick around and take care of him. And the whole experience, though it was tragic, made her happier in the end. It was an elaborate, twisty story—my hairdresser is a long-winded man with a real talent for anecdote—and very dramatic and moving. At one point we were both choked up. I changed the details, but the overall arc became the title story of Signs and Wonders. So be careful what you tell your hairdressers. They may not keep it to themselves.

What's the worst idea for a story you've every had?
It’s hard to pick just one, as so many of them are terrible. I’d say my worst ideas tend to be stories that are meant to be written by other writers and aren’t moldable to my voice or strengths. This year I tried to write a story inspired by Ishiguro’s The Unconsoled, because I love that book, but what’s lyrical and mysterious in his prose became muddied and pretentious in mine.

Where do you do most of your work?
I hate desks. I write on the couch or in bed or very occasionally at the dining room table. I get a lot of ideas when I’m not at a workspace (i.e., in the shower, on a plane), and I like to let them live in my head for a while before I write them down. I once read an interview with Alice Munro in which she talked about idleness and woolgathering—sitting around the house in her robe and slippers—as a crucial component of her work. I’ve taken this to heart, perhaps excessively so.

What story by another writer do you most wish you'd written?
Probably Jean Stafford’s “Children Are Bored on Sunday,” which I have read a thousand times. It’s about a woman named Emma whose life in New York has gone seriously awry. She goes to the Metropolitan Museum and forges a tentative, alcoholic alliance with an acquaintance named Alfred Eisenburg, who’s also a mess. The story is so acutely observed, pitiless and yet heartbreaking. In particular there is this sentence toward the end: “To her own heart, which was shaped exactly like a valentine, there came a wing-like palpitation, a delicate exigency.” I’ve puzzled and marveled over that sentence for years. The words sound uplifting, but they come at a moment of downfall for the character.  And I love that her heart is shaped exactly like a valentine, which is both funny and sad. The whole sentence is complicated and mysterious and beautiful—everything I aspire to in writing.