Lucia Perillo on the Poetry of Raymond Carver's Prose

In the 14th in a series of posts on 2012 short story collections entered for The Story Prize, Lucia Perillo, author of Happiness Is a Chemical in the Brain (W. W. Norton), talks about what we talk about when we talk about Raymond Carver. 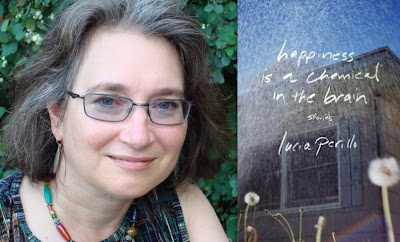 In my morning procrastination ritual the other day, as I put off working for yet another hour, I pulled down my Library of America edition of the short stories of Raymond Carver, the black book with a stern blue ribbon to mark the reader’s place. In poking through the stories, I was reminded of how much I liked them, and I started thinking about why.

They are memorable, of course—like Flannery O’Connor’s stories, you notice that they fall easily into that “and then there’s the one about” mental retrieval system: the guy who smokes pot with the blind man, the fishermen who find the dead girl in the river. Flipping through the book, what struck me was how plain the exposition is, to the point of being almost banal. Why then do these stories lodge like thorns in the brain?

In 1984, I went to Syracuse University (only because it was the only graduate school that accepted me) where Carver happened to be a towering and nearly silent presence in the English Department. I went as a poet and crossed paths with the great writer only occasionally, as he spent his time working in a house with a sign on the porch that turned visitors away. At that time he was trying to extricate himself from teaching but still he took over our poetry workshop whenever our professor was gone. People forget that the volume of his collected poems weighs about as much as his collected stories, and that he pursued both forms with equal diligence.

Carver’s being a poet gave him a facility with the metrical construction of his prose, and this is why, I think, the simple dialogue invades the mind with such force. Take these lines from “Why Don’t You Dance” (the one about the man who puts his furniture out on the lawn):


The man came down the sidewalk with a sack from the market. He had sandwiches, beer, whiskey. He saw the car in the driveway and the girl on the bed. He saw the television going and the boy on the porch.
“Hello,” the man said to the girl. “You found the bed. That’s good.”
“Hello,” the girl said, and got up. “I was just trying it out.” She patted the bed. “It’s a pretty good bed.”
“It’s a good bed,” the man said, and put down the sack and the whiskey.

The poet Carver surely planted the metrical firecrackers in this passage. There’s all the matched constructions (I’ll put what I hear as the accented syllables in capital letters): CAME down the SIDEwalk/SACK from the MARKet; CAR in the DRIVEway/GIRL on the BED.  There’s the two-beat phase, or spondee: THAT’S GOOD.  The phrase PRETty good BED becomes, in the man’s reiteration, another spondee:  It’s a GOOD BED.  And the spondee falls like a rock into the story’s pond.

This is why, throughout his oeuvre, the dialogue strikes us as so crisp, though it is forged from the simplest words. Carver’s sentences make use of a full metrical toolbox: inversion, repetition, and what Gerard Manley Hopkins called “sprung rhythm”—that is, the inclusion of more accented syllables than are naturally found in the language, in order to heighten the ordinary. And to control, through the writer’s eyes and tongue, our processing of it.

My favorite dialogue-exchange in the body of Carver’s work occurs not in a story but in the poem “What the Doctor Said.” It’s a hilarious piece, built mostly from dialogue, about a doctor’s telling a man that he’s dying of lung cancer. I’ll quote just the end, which is famous among Carverites:

The way I read that final line, it’s regular iambic, dah-DUM dah-DUM for five beats, and then a final spondee, SO STRONG (DUM-DUM).

With that double accent, the reader feels a little outrush of breath that can be painful, or audible, or both. When there’s a roomful of listeners you can even hear them going awhhh.
Posted by The Story Prize at 5:12 PM