In the eighth in a series of posts on 2012 short story collections entered for The Story Prize, Johanna Skibsrud, author of This Will Be Difficult to Explain (W.W. Norton), discusses origins, inspiration, ideas, and obstacles. 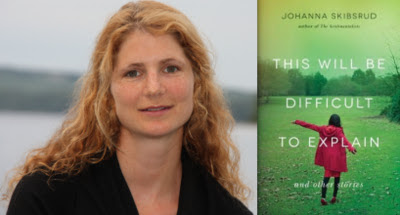 What made you want to become a writer?
Being read to as a child. I became aware very early on, thanks to my mother, of the infinite—and very real—possibilities that fiction offered. Later, when I started to write poems and stories of my own—and again, due to the sympathy and support offered by my parents and teachers—I had the privilege of feeling that my attempts were worthwhile. That my writing communicated something beyond the simple arrangement of the words on the page. Just the hint of that possibility—and its reward—was enough encouragement for me to keep on trying.

What writer or writers have you learned the most from?
In order of appearance (in my life): Virginia Woolf, Knut Hamsun, Vladimir Nabokov, Carson McCullers. These writers have acted not so much as influences but as revelations. Each of them opened up for me, at different stages of my own development, whole new realms of possibility for writing.

What story by another writer do you most wish you'd written?
“The Track Meet” by Delmore Schwartz.

Where do you do most of your work?
We’re moving next month so I’ll have a brand new room to write in soon. It’s at the back of the house, with a big window that looks out onto a small cactus garden. Where I write is very important to me, and it was a big consideration when we were looking for a new place to live. But really, my requirements are fairly simple. Natural light and a door that closes.

Where do you find inspiration?
I think inspiration comes from combining the simplest and most particular details of everyday life with bigger questions about the world, and our place within it. For me, an idea strikes when for whatever combination of reasons a certain concrete moment in a life or a relationship seems, suddenly, to be asking one of those big questions.  Then—even if very briefly—offering some suggestion of reply.

How often does an idea for a story occur to you, and what triggers those ideas?
Sometimes two or three in a day, one after another. Other times, whole months will go by without a single idea. That’s usually because I’m working on something else: poetry, or a novel. If I turn my attention back to the short story form—either through reading, or through my own efforts—the ideas come back, too. They’re everywhere. It’s just a matter of noticing them.

If you've ever written a story based on something another person told you would make a good story, what were the circumstances?
When I was nine years old my sister—two years older—suggested that a good story would be about Siamese twins who have to undergo a separation operation. I wrote that story and entered it into a National short story competition for kids where it won first place. It was later published in book form and tucked into the seat pockets of Air Canada flights—my first published story.

What's the shortest time it has taken you to write a story?
Approximately 9 hours.

What's the longest time it has take you to write a story?
Approximately 9 years.

What's the worst idea for a story you've every had?
I don’t think I’ll tell you, because I keep thinking about it and am not totally convinced that—if I come up with the right way to do it—it might not also be my best.

What obstacles have you encountered in your work, and what have you done to overcome them?
Knowing where a story ends. The struggle for me is to find the balance between the initial impulse with which a story began and a potentially endless revision process.