Alice Petersen and the Misplaced Prediction

In the 38th in a series of posts on 2012 short story collections entered for The Story Prize, Alice Petersen, author of All the Voices Cry (Biblioasis), reveals her narrative modes. 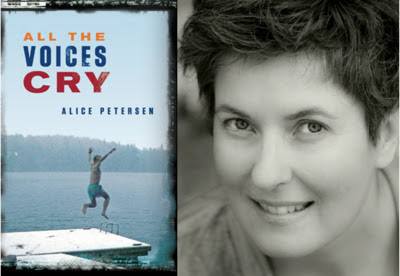 I love family stories that have a twang of the extraordinary about them. One of the stories in All the Voices Cry has its origins in a piece of family mythology.

When my father was young, during the 1940s, his mother used to give regular card parties, together with lovely afternoon teas. One lady who often attended could predict the future. Once she wrote down a prediction for my father. He read it and put it in an envelope. He has since misplaced that envelope, somewhere in the boxes of belongings that were delivered when the family house was sold at the end of the 1970s, but he says he never threw it away. Still, Dad can’t remember what the prediction said. Now my parents have a wonderfully impossible box room—you can’t just walk in there and look for something—you would have to pull everything out—so we have yet to locate the envelope, although it must be there.

At a family reunion a few years ago we agreed that the idea of the prediction would be a good topic for a story. On that occasion, my daughter and I had just arrived in New Zealand, having totally missed Christmas Day, on account of crossing the Pacific dateline. This loss had been quite hard for my six year old. It occurred to me that you could also lose a day that you did not want to see come, which is how the central character in “Mrs. Viebert’s Prognostication” attempts to cheat his own fate.

But can you cheat fate so easily? And if you succeeded, or if you failed to read the signs properly, would there be a second event in store for you that was your real fate?  This is where the story ends.

The idea that Norman’s life has been directed by a prediction made me think about fate operating from a distance. I did not want to get too close to Norman—I wanted to set him free with his prediction and watch him scuttle about trying to evade it. The action is set either in the distant past or in a kind of limbo of airplanes and airports. Norman thinks that he is planning events, but he is a bit of a blunderer and forgets that the plane might stop on an island in the Pacific en route.

Each story in All the Voices Cry has a narrative mode, or mood, that to my mind suits the subject matter. I decided to use a narrative voice that was not always kind; one that was faintly amused by the variety of fates allotted to the players. I made unjust comparisons between secondary characters: “In 1951 General Freyberg became Baron Freyberg of Wellington and of Munstead in the County of Surrey. Nobody knew what became of Baby Viebert.” In some places I used a deliberate carelessness in phrasing to maintain this distance: “Not long after space men began to speak to Poor Gladys through the radiogram, they came and took her away.” For this reason the narrative voice is not as impassioned as some of the other voices in the book; it is possibly even disagreeable under examination.

I am a bit of a packrat when it comes to historical detail. It was my pleasure to add in a few remnants from my parents’ wartime childhood in New Zealand: a set of yellowed notepads printed up with grids for a game called “Smash the Nazi Navy” (much the same as a game that we played in the 1980s under the name “Battle Ship”) and a rumpled pair of khaki shorts that my father wore as a little boy.

Likewise, the playing card with the picture of Icarus on the back of it comes from a set that belonged to the same grandmother who gave the bridge parties. The picture is Herbert Draper’s “The Lament of Icarus.” We received those cards in the boxes that were delivered at the end of the 1970s, so I have looked at that picture since I was a little girl. Draper has painted a thoroughly gorgeous Icarus, with vast wings. As a child I thought that Icarus was dreaming and that the mermaids were about to wake him up. I like to think that the real Mrs. Viebert played a good hand with these cards.
Posted by The Story Prize at 2:53 PM