In the 39th in a series of posts on 2012 short story collections entered for The Story Prize, Michael Jeffrey Lee, author of Something in My Eye (Sarabande Books), discusses some story ideas he pursued that didn't work out. 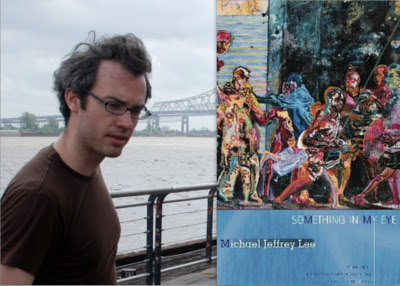 What’s the worst idea for a story you’ve ever had?
I have ideas for stories all the time: I might be standing on a bridge, looking down at the freezing water, I might be walking home late at night, trying not to be murdered, or I might be getting intimate with a significant other, but no matter where I am or who I'm with, my mind is working overtime, helping me generate fresh ideas and inspirations for my fiction—that’s why I always keep a pen at the ready. There are days when I can barely jot my ideas down fast enough, and I can fill whole Moleskins without coming up for air … it’s on those days that I feel my most healthy and human.

But some of my ideas over the years have been very bad—a few of them have made me downright ashamed of my own brain. Even worse are the bad ideas I insist on laboring over for long periods, bringing them all the way to draft form. A few years ago, I spent several months writing a story about an incarcerated man. He had done something awful, his execution day was quickly approaching, and the stress was causing him to lose his grip on reality: Alone in his dark cell, he would hallucinate and see people that weren’t really there, talking and dancing and carrying on with them until the wee hours. Then, the night before the state was set to murder him, something unexpected happened: He died in his sleep, an apparent heart attack. Then the story took a turn for the humorous, and the bumbling guards, fearful of legal action, tried to carry out the execution as planned, and spent the rest of the day attempting to fool the sheriff and the chaplain and the victims’ family into thinking that the condemned man was still alive, right up to the point that the switch was flipped. I am particularly proud of the last supper scene, messy as it is, though I don’t think much else about the story works—I realize now that the idea was just not original enough. Many authors have just written that story better, and I had no business thinking I had anything new to bring to the table.

And just a few months ago, I found myself working on another dud—it was a story about a woman who dreamed every night about owning a hybrid car. She wanted to use less gas and help the environment, and even though such a car was well beyond her means it didn’t stop her from thinking about it night and day. She was obsessed, and who could blame her? Also, she was very old, which I was hoping would make her more sympathetic. But then an interesting opportunity came her way: a famous game show began filming in her town, and something told her to try and get on it, so she did, and, just her luck, the grand prize of the day was a hybrid car, and through a combination of chance and skill she managed to win it. She drove it home that day, and it was the happiest day of her life. But that’s where her luck ended. She crashed the car the very next day, and before long, everything in her life was going wrong too, and sooner or later she found herself on the street. The last scene was quite ironic: a jeweled hand passing a single dollar bill out the window of a hybrid car to the protagonist, who stood shivering on a median beneath a freeway overpass. I didn’t really like the story when I began it, and I really didn’t like it when I finished it, especially because it seemed to imply that the old woman deserved a severe punishment for desiring something well beyond her means. I’m glad I lost the story when my computer got wet.

Just the other day I had another bad idea and wrote on it; from sunup to sundown I worked on this story that will probably never see the light of day. It was a tale of two roommates. They were friends, and they were living in an apartment together. They were both working odd jobs, and, interestingly, they were both involved in romantic relationships that were eating their souls. Anyway, one night, one of the roommates finally snapped, and he packed up his car and drove to the river and then drove his car into the river, but he decided at the last minute that he wanted to live, so he rolled down the window and escaped. The next day he cut ties with his sweetheart, purchased a bike, and turned his life around. The other roommate was happy for him but still mired in his own toxic relationship, which he persisted in for a few more weeks, but one night, his anxiety became too great, and he snapped, and did the same thing with his own vehicle and possessions, and he too turned his life around. Actually, I’m not really sure if this is a bad story or not. I know these people, and I feel too close to the material to be able to judge it accurately. But I suspect that it’s bad, very bad and nasty and quite possibly my worst, and I don’t think I’ll return to it anytime soon.

Anyway, those are some bad story ideas, and if I wasn’t so excited about the one I’m working on today—it’s about a church group building toilets for some grateful villagers in Nicaragua—I’d feel much more depressed about how much of my life I spent working on them.
Posted by The Story Prize at 1:22 PM