In the 24th in a series of posts on 2013 books entered for The Story Prize, George Saunders, author of Tenth of December (Random House), discusses thematic cling-ons, initiating tidbits, and reading velocity. 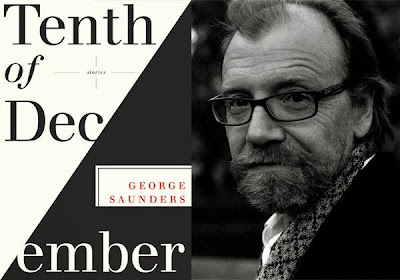 How often does an idea for a story occur to you, and what triggers those ideas?
Well, they don’t occur to me often enough, that’s for sure. For me it’s not so much about having an idea, per se, but rather about having a way to just get a few sentences cranked out, with as few “thematic cling-ons” (sorry, that’s a highly technical Creative Writing Workshop term) as possible. What I’m really trying to do is avoid having an idea, while still producing sentences, and managing to build some sort of tension. When I get “an idea,” that’s trouble. Because my ideas are like: Deconstruct the capitalist paradigm. Or: Do something that sort of parallels that one thing that happened that time, but is more dramatic.

If you've ever written a story based on something another person told you would make a good story, what were the circumstances?
I can honestly say I’ve never done that. I’m not against it – but I think I automatically resist the “Oh, have I got a story for you” vibe—even if that voice is coming from me. Any story that I can think of in one chunk—before I write it, for example—generally doesn’t turn out very well. Because then the risk is, the story turns out just the way I planned. It says just what I intended it to. Which is dull, for the reader and the writer. What I like is to start out, tentatively, and as idea-free as possible—and then (closely watching the energy of the story), see where I end up. So, like I said above, the smaller the initiating tidbit (another technical Creative Writing workshop term), the better.

What's your approach to organizing a collection?
Well, usually about a year before I finish the book, I start to get a pretty good idea of what’s going in there. There might be a couple of things still in-progress, but there usually comes a time when, looking out on to the horizon, I feel: Yes, those stories I’ve finished, plus, maybe, these two in a pipeline, represent a coherent artistic blop (yet another technical etc., etc.). So once I get all of those stories done, I take a deep breath and make an index card for each: Title, first line, last line. And then I start moving those around on the floor or a big table. The idea at that point is: Which order would propel a reader most effectively through this book? That is: How can I arrange these so that the reader finishes the book, and feels great when she does? And from there it becomes a bit of a logical puzzle. These two stories should (or shouldn’t) go one after the other; this story needs to go first; this would make a good closer, etc., etc. And this process is exactly equal, turns out, to trying to produce the most thematic power—somehow, if I arrange the stories to produce a nice reading velocity, they turn out, also, to be telling a sort of under-story—one that I wasn’t really aware of as I was writing the individual stories.

What's the worst idea for a story you've ever had?
Well, I wrote an unreadable 700-page book based loosely (not loosely enough, apparently) on a friend’s wedding in Mexico, which was called “La Boda de Eduardo,” which I think translates as “Ed’s Wedding.” So that would probably be it. The wit of the title says it all.

What's the best story idea you've had that you've never been able to write to your satisfaction?
That would be something top-secret I’m working on right now. Nice try, Larry!

Where do you do most of your work?
I have a little former tool-shed about 100 feet from our house. No internet, no phone.

In what other forms of artistic expression do you find inspiration?
I like to play guitar and have been doing this since I was a kid. I’ve recently started writing songs again. I really like to listen to music (not while I write, of course). Lately I’ve been listening to a lot of Regina Spektor. I think she’s brilliant. I love the unpredictability and heart of her songs, and I find listening to them very inspiring—a wonderful reminder that what we’re really doing in art is trying to make delight. I also love the songs of Rodney Crowell. He came to Syracuse last year and did a master-class on songwriting that I am still drawing on, for both songs and fiction. He has a great, open-hearted approach to writing, very generous—and he said a few incredible things about songwriting that really hit home for me. I learned so much about writing by just sitting there listening to him perform—mostly what I learned, or was reminded, is that we have to communicate. That’s at the heart of it.

What's the best and worst writing advice you've ever gotten?
I got two great pieces of writing advice while I was at Syracuse, one from Tobias Wolff and one from Douglas Unger. Both were more experiential—they weren’t one-liners. They were both very specific interactions that came at just the right time. Toby’s had to do with keeping the magic in one’s work, and Doug’s with dialogue writing.

I don’t think I’ve really ever gotten bad writing advice, except from myself.  It went like this: “Hey, you’re going to a wedding in Mexico? That would make a great NOVEL!”

Well, actually, there is one other bad piece of writing advice I might mention. It’s that dreadful old creative writing chestnut, “A coherent artistic blop must not consist solely of thematic cling-ons, unless one of these is also the initiating tidbit.” I just don’t buy that anymore.

What obstacles have you encountered as a writer, and what have you done to overcome them?
The biggest obstacle I’ve encountered (and one I am still encountering) is that I have a tendency to want to coast. That is, to show up in the morning and sort of go on auto-pilot, being very sure of myself and my project, without being willing to really dive in, change course, find some new energy in the story, reject what I think I know about it. That’s an ongoing challenge, I think. And not just in writing.

What's the shortest time it has taken you to write a story?
Well, I wrote “Sticks” in one go, in about twenty minutes, at my desk, when I was working as a tech writer. Of course, it’s only about 400 words. And I was a super-fast typist in those days.

What's the longest time it has take you to write a story?
It took me fourteen years to finish “The Semplica Girl Diaries.”  That is, unless I start revising it again.
Posted by The Story Prize at 7:10 AM