Peter Orner Walks Around with It

In the 19th in a series of posts on 2013 books entered for The Story Prize, Peter Orner, author of Last Car Over the Sagamore Bridge (Little, Brown), discusses where he gets his ideas, how he organzies a collection, and the best and worst advice he's received, among other things. 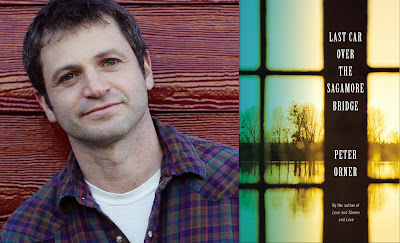 I often can't keep track of ideas I have for stories. I spend a lot of time running from new story ideas because they distract from stories I'm actually trying to write at any given moment. This said, my idea of a story is pretty elastic. Or plastic? A gesture remembered after many years is a story. A fading sign on a building, you know the ones that are revealed when they are tearing an adjacent building down? That's a story. Three stories occurred to me just in the past couple of hours - I've got them here in a notebook (a notebook I am always losing):


What triggers these ideas? I think just walking around, that's where I get most my ideas. Walking by a pool led to the first, an easy one. The second one came from seeing two women at a table in a cafe sitting silent and staring at each other without talking for at least ten minutes. After a while I started keeping track. It was a beautiful thing to watch, that unusual silence. The third one, I've got no idea where it came from exactly, but I've always wondered about the fact that many of us—this is true in my family—have no passed on knowledge that goes back more than three generations. So my old man in this story I have not written wonders how we can lose the faces of people that are so essential to our own existence. Our mother's mother, we can know through our mother, but what about our mother's mother's mother? Her too we might have some stories about. But what about our mother's mother's mother's mother? How can the face of someone this important vanish so completely?

If you've ever written a story based on something another person told you would make a good story, what were the circumstances?
I'd love to say I've tried this, but when people bring stories like this, I often find that, for me, they are the exact sorts of stories that don't make good stories. A good story sneaks up on the teller in less overt ways.

What's your approach to organizing a collection?
I agonize over the way a collection is organized. Collections are very strange animals and the art of putting one together is something that obsesses me. A story collection is one organism that is made up of parts, all of which, in one way, or another, must stand on their own. But they stand taller, better, when next to their compadres. I know the method to my madness isn't always evident, but I sweat for months, even years, over what story should go before, and what after, another. I do my best to arrange them so that very disparate stories speak to one another. Its like putting together a family, a weird one, as weird as any ordinary family actually is. It has to feel entirely natural that they come together, but at the same time, you think, how the hell are these people actually related? Like any family. At Thanksgiving.

What's the best story idea you've had that you've never been able to write to your satisfaction?
Just thinking about this question hurts because there are so many.


Where do you do most of your work?
In my garage where a feral cat I've named Joe sometimes comes to visit me. Joe's a girl. She sleeps under my green lamp.

In what other forms of artistic expression do you find inspiration?
Painting, as well as drawings, particularly line drawings. Amazing how an artist can get so much life, how much power, into a single jagged line. I do my best to emulate this in my stories as much as a possibly can. I love Paul Klee's weird little drawings. He has one that he did while in the army. He made a little forest out of some numbers on some kind of invoice. Music. Where to start? This morning it was Sly and the Family Stone, "It's A Family Affair," which I played over and over for my three year-old.

What obstacles have you encountered as a writer, and what have you done to overcome them?
Chronic self-doubt. Inventing characters who aren't me has allowed me to escape myself. I'm very grateful for these folks for letting me be them instead of me, if this makes any sense.

What's the shortest time it has taken you to write a story?
There's a goofy story called "Shoe Story" about two guys sitting in a hamburger place when a woman in an apartment above starts arguing with her boyfriend. She ends up throwing her shoes at him and the shoes fly out the window and land in the street. The two guys in the hamburger place look at the shoes. I wrote it in one draft on the subway in Boston, between stops. Nothing like that's ever happened to me since.

What's the longest time it has take you to write a story?
I've got a tiny story about Mary Todd Lincoln in a hotel in Chicago years after her husband's murder. The story used to be ten pages. It's now a half page. I wrote the earliest draft of the story eight years ago. This is kind of the norm with me. Stories in early drafts are a ususally lot longer, often by many pages than the finished ones. I cut and I cut.
Posted by The Story Prize at 3:10 PM