Sara Pritchard on Making Stories That Are Big on the Inside

In the 21st in a series of posts on 2013 books entered for The Story Prize, Sara Pritchard, author of Help Wanted: Female (Etruscan Press), compares stories to elaborate peep boxes. 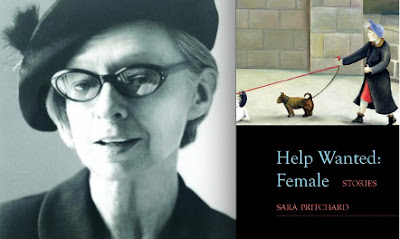 The year is 1918. Roland is eight years old. He’s in his stocking feet, standing on a needlepoint footstool. He’s leaning forward, one palm on each side of a polished mahogany box the size of a breadbox, mounted on a pedestal. A bronze plaque on the box says, “Island of Despair.” Roland is looking in the peephole. In a ray of light, he spies a castaway washed up on a tropical beach. In the foreground: a shipwreck, pirates. In the jungle receding from the beach: parrots…cannibals!

The earliest peep boxes—or peepshows, as they were called—can be traced back to fifteenth century Europe. They were wooden boxes with a peephole and a light source, which depicted in three-dimensions scenes from fairytales, myths, Bible stories. Peep boxes were often carried from village to village by a narrator who told a story then invited the audience to pay a penny for a peep into the story box. “Step right up!” the storyteller would bark. “Right this way! Only one penny! See for yourself!”

Gradually, peepshows became more sophisticated, with changeable panels for backgrounds, puppet-like characters that could be manipulated with strings, multiple light sources and peepholes that could be opened and closed to afford different points of view, and often mirrors that distorted or a magnifying glass that expanded the perspective. Elaborate peepshows became popular curiosities in Victorian parlors. They were the predecessors of stereoscopes and Viewmasters, and applying the penny-a-peep strategy to the foolproof marketing triumvirate: cheap, private, and lewd, peepshows evolved into the live sex acts viewed from a discreet coin-operated booth, which the term conjures today.

Fast-forward forty years from Sopwith Camels and the Spanish influenza, from the parlor with the Robinson Crusoe peep box and my father in his stocking feet. It’s 1958, now I’m eight years old, and my father and I are building a peepshow out of a deep shoebox. We’ve covered the top and bottom of the box with wallpaper found in the attic, something with tiny pine boughs and pinecones. With tin snips and a can, my father fashions a light source on top—a spout like on the Morton’s salt, only bigger. He cuts a perfectly round peephole in one end of the shoebox.

Inside we build the scene, based on my favorite record: Sergei Prokofiev’s Peter and the Wolf, narrated by Sterling Holloway. I draw Peter with his pop gun and Sasha the bird, Sonia the duck, and Ivan the cat, and of course, the wolf with his big yellow teeth, fancy boots, and evil smile, that terrible wolf licking his chops while plucking a duck feather from his red vest. I trace their likenesses from a storybook and color them with great vividness and care, sharpening my crayons often so as to stay within the lines. These characters we paste onto balsa wood, and my father cuts them out carefully with an X-acto knife. We stand them up with handmade balsa wood supports modeled after the chipboard ones that come with paper dolls. For a long time, I have been collecting those Little Tree air fresheners that hang from the rearview mirror of my father’s Desoto, so the Russian forest is all taken care of, though populated with Colorado Blue Spruce.

The result is marvelous. You can peep into the box and the entire story comes alive. With your little eye you can hear the oboes and bassoons and Sasha’s flute song, catch the wolf about to swallow poor Sonia, smell the evergreens—all of it in a Red Wing shoebox.

I don’t know what happened to the peep box that my father and I made so long ago, but here is a link to “A Peepshow with Views the Interior of a Dutch House,” created by the seventeenth century Dutch artist Samuel van Hoogstraten, which is part of the collection of the National Gallery in London. Scroll down to the video, which shows different views, with commentary, of van Hoogstraten’s extraordinary peepshow.

Van Hoogstraten, who studied with Rembrandt, was not only a master of realism, miniatures, and optical illusion, he exhibits an almost Escher-ish sense of perspective, a bending of space that achieves a depth of perception, a richness and fullness far beyond the boundaries of the small peep box itself. Everything inside, in miniature: rooms, furniture, paintings, mirror, people, dog. In the National Gallery video, Professor Philip Steadman (in the spiffy sport jacket) likens van Hoogstraten’s peepshow to Dr. Who’s Tardis: much bigger inside than out.

That’s how I think of short stories—not defined by length or word count but by what’s inside: the bigger, the better.
Posted by The Story Prize at 10:04 PM