Ethan Rutherford on Knowing When to Quit (and Not Quitting)

In the 25th in a series of posts on 2013 books entered for The Story Prize, Ethan Rutherford, author of The Peripatetic Coffin (Ecco Press), explores the "nightmare of uncertainty" that plagues writers. 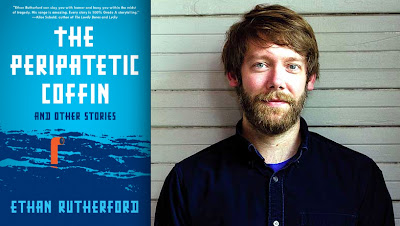 We all have them, the shelved stories, the bottom-drawered novels, the ideas that seemed like a good idea at the time that, only after much energetic typing, reveal themselves to be bankrupt, or one-note, or simply not going anywhere interesting. Flat prose, entropic characterization, who knows what else. It’s heartbreaking, this failure, when it happens. But it’s part of the job. Some stories get the breath of life, other stories, no matter how much time and energy you spend on them, don’t. This is not such a big deal if you’ve only put a few weeks into something. It is a big deal if you’ve put in some diligent years. It’s the difference between deciding in the hangar that it doesn’t look like you can fit the wing on the plane, so let’s not really worry about taking off, and having what you thought was a well constructed plane re-route itself over the Atlantic and crash-land on the island of Total Depression. (They do serve drinks there, I know from experience, so at least there’s that.)

Part of being a writer is having the confidence and inner reserve to push through on projects even when everything (and, perhaps, everyone) is telling you it’s a bad idea. You need to have faith in yourself and an unshakable belief that the work you are doing has value, otherwise you’d stop. No one will be reading books in ten years! someone, usually a relative, says at a party. They’ll read THIS book, you say—to yourself, but also to the room, because now everyone is watching. But you also have to know when it’s time to whistle a project to the sideline. And the tension between when to push through on a project and when to set it aside is, for me, one of the hardest parts of being a writer. You think: Maybe if I just change the tense, that’ll solve the problem or maybe if I print this out, then write it again by hand, and then type it back into the computer, it’ll be better. I just read, here on this site, that “The Semplica-Girl Diaries” took George Saunders fourteen years to write. I love that story; I think it’s a masterpiece. Fourteen years well spent, if you ask me! I’ve been working on a story narrated by Conan the Barbarian for seven years. Sadly, I’m not kidding about that. I recently put it aside, probably for good. But maybe what that story really needs is another seven solid years of work?

A good friend of mine—a writer—told me recently that it was the novelist Diane Johnson who came up with what many people consider to be the most chilling scene in The Shining: the moment when Shelley Duvall sees that the big book her husband has been working on all winter consists of nothing but the phrase “all work and no play makes Jack a dull boy” typed over and over again. That’s the tipping point in the film, when terror, which is dread, gives way to horror, which is repulsion. It’s a brilliant addition—the scene is not in the book—and it did not come from Kubrick. It makes sense to me that it was a writer who came up with this nightmarish moment.  It is, in may ways, the nightmare of uncertainty that plagues most writers mid-project: that perhaps all our work is just typing, it’s not about anything, it’s not alive, but here we are, at seven hundred pages—proof of an unwell mind. Not a happy reveal at all. My wife, not a writer, has said: Your nightmare? Try my nightmare.

So what to do about this? How do you know when what you’re working on has lost its legs? I’ve asked all the writers I know, and I get mostly shrugs followed by a dead-eyed gaze that drifts toward the horizon, where the sun is rapidly extinguishing itself. I think of Tom Drury’s detective Milo Hahn, saying “Are you kidding me? There ain’t no answers, people.” And maybe there aren’t. But it is clear that part of learning to write is learning how to read your own work, knowing when to give it space, and learning to trust that whatever creative process you have will, eventually, deliver you somewhere interesting, see you through the crashed projects. And that it will be worth it, no matter how long it takes.
Posted by The Story Prize at 8:30 AM