B.C. Edwards and the Terrifying Malady

In the 26th in a series of posts on 2013 books entered for The Story Prize, B.C. Edwards, author of The Aversive Clause (Black Lawrence Press), discusses the frequency of his ideas and how he puts a collection in order. 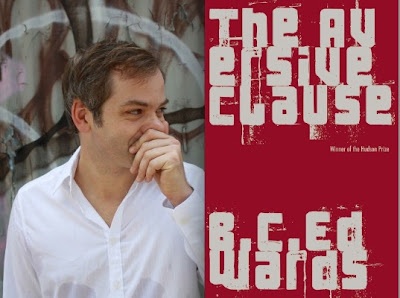 How often does an idea for a story occur to you, and what triggers those ideas?
All the time and anything. It’s sort of a terrifying malady, knowing that at any minute you might be hit with a concept for a character, a place to set something, a turn of phrase that sparks an entire narrative, and then be compelled to write it down as quickly as possible before it vanishes.

If you've ever written a story based on something another person told you would make a good story, what were the circumstances?
"Tumblers," the opening story in my collection The Aversive Clause, was written that way. It was three a.m. at a bar. All the parties were drunk, no one was taking notes, nothing was remembered accurately. I think that’s the best way to do this sort of thing.

What's your approach to organizing a collection?
If you’ve got a short, sweet piece of flash that really hits, put that first, it’s an amuse-bouche at the top of a meal. Then the strongest story next. Your next strongest at the end. The third strongest right in the middle so there’s something at the center of the book that pops, kind of like the centerfold of a porno-mag. Your weirdest story, (the one that you love and your editor and readers didn’t understand and may have told you to pull out of the collection) should go second or third to last. If you have a story that involves the end of the world, the zombie apocalypse, death by ebola-like-super-flu, or anything else that would make a really terrible movie put that in the first third. Anything involving a dystopian future or near-future should probably be buried toward the end, everyone’s writing that stuff these days. If you’ve got a story that closely mirrors a recent breakup or divorce put that as near to the front in proportion to how far you think your ex will make it through the book before putting it down.

What's the worst idea for a story you've every had?
A story I wrote in college about an arsonist. It was called "The Joner "because I really liked inventing words. It was mostly based on the MC 900 Ft. Jesus song “The City Sleeps.” It took place in a café. There was a generic kindly old black man named Bass (like the guitar). That’s about all I can remember.

What's the best story idea you've had that you've never been able to write to your satisfaction?
I wrote a story about dead people and the various jobs they have while they are dead and how annoying they are, but I think it’s supposed to be a graphic novel. And I am a terrible drawer.

Where do you do most of your work?
My first book was written almost entirely at two coffee shops. Phoebes (RIP) and then Cho’s Variety both on Graham Ave. in Williamsburg. Lately I’ve ben writing mostly from home and a cabin in Woodstock.

In what other forms of artistic expression do you find inspiration?
I really like building fires and then watching them burn. Does that count?

Also, tennis. I like to play before I write most days. There’s something to the rhythm and grace(lessness) and the mental and physical strain that is perfect.

What's the best and worst writing advice you've ever gotten?
I wrote a piece for the NY Times’ blog about some of the best advice I’ve received.

In terms of the worst… Whenever someone starts saying things like, “treat every word like a precious jewel,” I get really uncomfortable. There was a lot of that in college, the need to make a sentence perfect before moving on to the next. And I couldn’t stand that. I hate the idea of anything you write being to precious to un-write. I really enjoy beating the hell out of the words.

What obstacles have you encountered as a writer, and what have you done to overcome them?
Facebook. It keeps winning.

What's the shortest time it has taken you to write a story?
I was supposed to go on a date with a guy. He canceled because he needed to finish a story for an all-gay-zombie-anthology-competition that had a deadline in two days. Out of spite, and boredom, I opted to write a story for the same competition. I made it in the anthology. He didn’t. We went on the date a few days later. It was pretty fun.

What's the longest time it has take you to write a story?
I started writing an epic fantasy novel series when I was nine. So twenty-nine years and counting?
Posted by The Story Prize at 8:30 AM