In the 28th in a series of posts on 2013 books entered for The Story Prize, Ben Stroud, author of Byzantium (Graywolf Press), talks about becoming more flexible about where he does his writing. 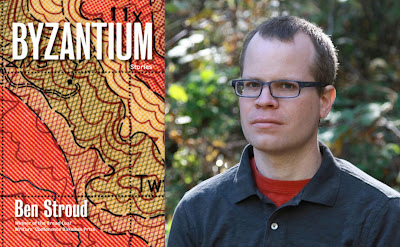 Where do you do most of your work?
I write at home, in whatever nook I can carve out depending on whatever place my wife and I happen to be renting at the time. I wanted to take on this question because I think it speaks to something important:  as writers, we can't be too precious about where we write. The main thing is to find some place, any place, where we can work.

When I was writing the first stories that would end up being part of this book, I was very particular about how I worked. We lived in Ann Arbor then—I was finishing graduate school. To write, I had to have the apartment to myself. I had to have the radio on and tuned either to WCBN (the University of Michigan student radio station), CBC2 (the Canadian station out of Windsor), or WRCJ, the classical station out of Detroit. I would work in the mornings, at my desk, printing out my drafts and doing my revisions in longhand.

Then we moved to Germany. German radio proved to be surprisingly disappointing—American top-40, Germany country music (which I found wretched), or the military station from the nearby Army base. I'd bought a new radio special at the Real (a sort of European Wal-Mart) only to be disappointed. So, the radio was out. Then there was the issue of space. Our apartment was small and there was no desk. I pulled the folding cafe table that was in the kitchen over to the living room window, along with the accompanying rickety chair. From the large desk piled with papers I'd had in Ann Arbor I was demoted to a roughly square foot surface in Wiesbaden. Oh, and the surface wasn't smooth, but made of slats with gaps in them. So I had to work on the back of a book. And the other change? My wife wasn't working. She had been warned (happily so) by a German bureaucrat that she could take no job; I was the one with the work visa. So now I didn't have the apartment to myself when I worked. But none of these changes mattered. All that mattered was getting to the writing. Curled over that little desk, I finished the title story of the collection, and wrote two others—"Amy" and "Tayopa." It's the writing space I most long for these days.

Now I work wherever I can. At home I have an office. It has no door, and so is open to the noise of the household—but that doesn't bother me in the way it once would have, long ago. When away, I work in whatever borrowed space I can find: in my in-laws' home office, in a coffee shop, sitting on patio furniture on a balcony while the rest of my family is down at the beach.

One piece of advice I'd give to any writer starting out is: Don't be so focused on finding the perfect place or time to write. The key is to find any time and place to write. The focus on needing just the right place can be another way to put off writing. And it's in line with the other perfectionisms that get in the way of doing the work. We'll never have the perfect environment, just as we'll never put together the perfect story. Getting over those hang-ups allows the true work to begin.
Posted by The Story Prize at 7:10 AM