In the 30th in a series of posts on 2013 books entered for The Story Prize, Peter Grandbois, author of Domestic Disturbances (Subito Press), discusses how music and paintings serve as gateways to his writing. 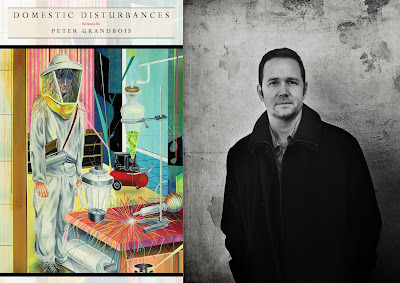 The short answer is, not often. Or, rather, the ideas that do come to me tend to be tethered to whole worlds, to casts of characters. They require the canvas of the novel. I came to short stories with the specific intention that I wanted to challenge myself to see how short I could make them. I believe in Millhauser when he says, “The short story apologizes for nothing. It exults in its shortness. It wants to be shorter still. It wants to be a single word. If it could find that word, if it could utter that syllable, the entire universe would blaze up out of it with a roar. That is the outrageous ambition of the short story, that is its deepest faith, that is the greatness of its smallness.” The problem was I didn’t have any “short” ideas. So, I went looking for them. I thumbed through a book of paintings by my childhood friends, The Clayton Brothers. I still remember the first painting that caught my eye: a portrait of a blue face under a showerhead. Only, instead of water coming out of the shower, there are all sorts of strange, slimy things. Something about those things dripping from the shower called to me, and I started writing. The initial draft of that story, which is now called “Plumbing,” was twelve pages. Respectable for a short story, but not what I intended. I cut it down to four.

In what other forms of artistic expression do you find inspiration?
All the stories in my collection, Domestic Disturbances, are written in the ekphrastic tradition. Each story is in conversation with a different painting by The Clayton Brothers. Each morning, I began my writing day by thumbing through their artwork either in their published books or online. The moment I saw an image that startled me, an image that made me curious, I began writing. I almost never knew what I wanted to write about when I began, but rather listened to what the image wanted to say to me, what the story wanted to say. No matter what I’m writing, I begin my writing day by immersing myself in another form of art, letting that art speak to me, listening, watching until I hear or see something that makes me curious. Often, I read poetry before I begin to write. Though to say “read” may be too strong. I skim, searching for that image that startles. If asked to say what the poem was about, I wouldn’t be able to tell you. I only want that image that serves as a gateway for me. Sometimes, I listen to music before I write. Both my published novels were written in that fashion: The Gravedigger is the result of countless hours of flamenco and Nahoonkara is influenced by the Indie, Denver band, 16hp.

What’s your approach to organizing a collection?
In high school and college I played in a rock band with my brother. We often spent a lot of time figuring out the play lists. Varying the set by theme and tempo, and, of course, starting and ending the set with our best songs. I think some of that mindset affects how I put together this collection. But the single biggest factor driving the arrangement of the collection goes back to the idea of brevity. I cut a lot of stories from this collection, including some that I thought were really strong, but that didn’t quite fit in terms of form or style. My favorite collections (and novels) are often those that privilege precision, those collections where you feel nothing is wasted, where you feel the author sacrificed a limb cutting away any piece that didn’t fit with the others. I knew from the outset that I wanted to set off the shorter flash pieces in the collection with a longer piece at the beginning that established theme and tone. I knew, too, that I wanted “What the Billy Goat Said” to end the collection. I wanted the murmuring voice that ends that story to linger in the reader’s ears long after he or she put the book down.
Posted by The Story Prize at 7:31 AM