Johnny Townsend Asks "What If?"

In the 32nd in a series of posts on 2013 books entered for The Story Prize, Johnny Townsend, author of Dragons of the Book of Mormon, throws out some ideas. 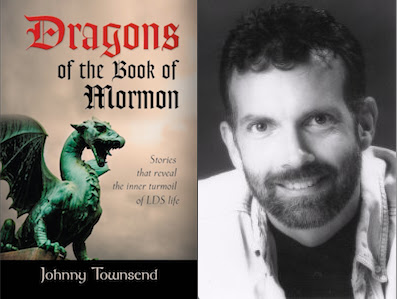 Hamlet was wrong. The question isn’t “To be or not to be.” The question is “What if?” That’s the question we as writers need to ask all the time. When people ask me where I come up with my ideas, the answer is basically, “Everywhere.” The trick is to see or hear or read something and let it spark a question in your mind. “What if?”

Once I was in an elevator on my way to work, and the elevator stopped between floors, just for a moment, but enough to give me a scare. Then I thought, “What if I were a woman, and I was trapped on an elevator with my lecherous boss?” Thinking about that led to my story, “The Elevator Ceiling.”

I recently attended a friend’s wedding. It was a lovely event, but I thought, “What if a supporter of Prop 8 was forced to attend his boss’s gay wedding?” That led to my story, “Bumper Sticker Theology.”

I read an awful story in the news about two friends who were lost while hiking in the fog in a state park. After a park ranger found them and brought them to their car, they drove off right into the lake and drowned. My immediate reaction was horror, but only a moment later, I thought, “What if a man who felt trapped in his marriage subconsciously forced his wife to do dangerous activities, like skydiving or taking hikes in the fog?” That led to my story, “The Eyes of March.”

Even reading a relatively humorous news story can lead to an idea. I saw a short article about Pakistan’s newest superhero—the Burka Avenger. Many people would just read the article and be amused. But if you’re a writer, you have to let things like that inspire you. I thought, “How can I turn that into a Mormon story? What if instead of the Burka Avenger, we have Temple Man, a guy who shows up at crime scenes dressed in Mormon temple clothes?” That led to yet another story.

Sometimes, it’s just a matter of reflecting on Mormon theology or doctrine. The Book of Mormon teaches that Three Nephites asked Jesus if they could live from A.D. 34 when they met him until his Second Coming, so they could spend two thousand years bringing souls to God. The practicalities of such an arrangement, when they didn’t ask for immortal wives, led to my story, “The Three Nephites Get Syphilis.”

There are ideas everywhere. What if the Golem of Prague was really Rabbi Loew’s secret lover? What if a Jewish scientist tried to develop the “God spot” in patients’ brains in order to create a Messiah? What if a “bad” person who goes to Mormon Spirit Prison after he dies decides to break out? What if a schizophrenic woman on anti-delusional drugs loses her delusional belief in God? If scientists debate whether or not there could be silicon-based life forms, what if a woman’s breast implants come to life? The ideas can be serious or humorous, but those ideas are everywhere out there.

Of course, there are always the stories based on personal experiences. My entire book The Abominable Gayman deals with my two years as a Mormon missionary in Italy. My story, “The End of the World,” details the last three months of my third partner’s life as he died of liver cancer. “The Removal of Debra” tells the story of my mother’s death from leukemia. Remembering years later an epic quest to buy Coke for my second partner suffering from AIDS led to my story “Partying with St. Roch.” Almost everyone has some real drama in their life that can end up as a story.

People talk about having writer’s block. If I don’t have a story idea, I just go about my daily life and don’t worry about it. Days or even weeks can go by with no ideas. That’s okay. The object is just to be open to ideas, and sooner or later they’ll come. I see no reason to fret about it if today I don’t have any story ideas. There’s no law that demands a writer write every single day. I write when I have an idea.

Watching Downton Abbey, I thought about the Mormon belief that the best Mormons will become gods one day, but those not quite good enough will become their ministering angels, kind of an Upstairs, Downstairs for eternity. What if there were class unrest in heaven?

I think I’ve got my next story idea.
Posted by The Story Prize at 7:00 AM