In the 27th in a series of posts on 2013 books entered for The Story Prize, Manuel Gonzales, author of The Miniature Wife (Riverhead Books), discusses the many offbeat story ideas he abandons and those he doesn't. 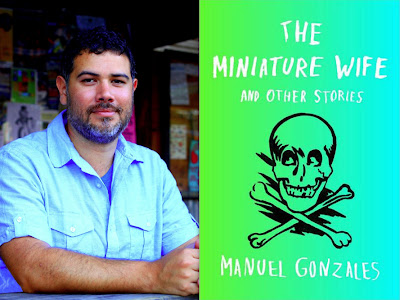 During a discussion of his work at the International Short Story Festival in Cork, Ireland, Alistair MacLeod, the well-respected Canadian author, said that he’d never abandoned a story once he’d begun it. He’d been publishing since 1976, had published two story collections and a novel and, recently, a collected works, and through all of this, every story he’d begun, he’d wrestled with it until he finished it.

Which does not describe me at all.

Just today, I deleted ten stories from a folder titled, New Collection, because they were sketches or because what I’d started no longer spoke to me or the idea, even if it spoke to me, seemed silly, which, considering I’ve written stories featuring unicorns and swamp monsters and robots, says something about how silly these story ideas were.

I could have deleted more of them, really. Unlike MacLeod, who carefully picks and chooses what he’ll write about before he even sets pen to paper, I grab story ideas at every chance I get, throw sentences onto the page willy-nilly, and then wait and hope that something comes of them.

Today alone, three story ideas popped into my head, one about an old woman who shows up at a young couples’ house and refuses to leave, another about a couple who uses a specially trained cat to act as birth-control (by inserting itself into the bed between them), and a third that I won’t mention because I think it might actually become a story at some point. These came to me while loading the groceries into my car, while washing the dishes, and while reading a book to my son at bedtime. It’s possible none of them will become stories, but for each of them, I’ve already composed various opening lines.

He told his wife the old woman looked like the kind of old woman, gnarled and haggish, who will, when you refuse them a bed for the night or a cup of soup, reveal themselves to be beautiful, vengeful fairy queens before laying a curse on you for being arrogant and handsome and princely, turning you into a hideous monster, and that that was why he let her inside. To which his wife responded that he was an idiot, and to this he didn’t quite disagree.

People have asked where my stories come from so I’ve tried to backtrack my thoughts to figure out what strange, meandering path my thoughts followed before actual words reached the page hoping to find some dark, mysterious magic to it all, but generally my story ideas grow out of misunderstandings, or poor extrapolations, or hyperbolizations. The story about the man who wrote a speech commemorating the sinking of the African continent into the sea, for example, came about when, looking over someone’s shoulder, I misunderstood the headline, “Farewell, Africa,” in The New York Times Week in Review section. The story about a man trapped on a plane that circles Dallas for twenty years I wrote after spending a lot of time on airplanes.

Most recently, the story of the old woman and the couple arrived while I washed dishes. Looking out of the window above our sink and into our backyard, littered at the moment with boxes and tubs and children’s toys and dead leaves and a shed that we don’t close, even when it rains because it is full of holes big enough for rats to climb through, rats who do not feel safe enough to nest there when the door is open, I thought about the poor state of our house and wished our landlady, who is ninety-one, would invest money into fixing it or would agree to sell it to my wife and me so we could fix it, which made me think about her own house—a split-level two-story, four-bedroom house in a hilly neighborhood and with an enormous front and backyard—which she lives in by herself, and which causes us undue stress (because she’s 91), and then I thought: What if she arrived on our doorstep one day having sold her overlarge house so she could move back into this house where she grew up, where she raised her kids and lived most her life? And then, because we’re unable to say no to a 91-year-old lady, what if we let her in and never tell her to leave?

Which, come to think of it, wouldn’t be the worst story I’d written.
Posted by The Story Prize at 9:24 AM