Johnny Townsend Wrestles with the Truth

In the 13th in a series of posts on 2014 books entered for The Story Prize, Johnny Townsend, author of Selling the City of Enoch, discusses how his fiction borrows from real life. 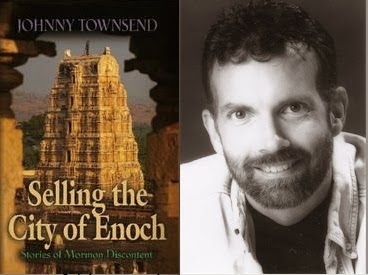 Is it better to make up stories completely from your imagination, or is it better to use the material around you every day in the form of friends and newspapers?

Personally, I think it’s best to take your ideas wherever you can find them.

A coworker, Keri, once told me of her friend, a pilot, who was killed when her plane caught fire and dove straight into the ground. Keri had access to the voice recording of the flight’s last minutes. “You don’t want to hear it,” an airline official told her. “There’s a terrible scream right at the end.” Keri decided to take his advice, though I was never sure that was the correct decision.

I was deeply moved by that account, but a full year passed before a story idea popped up that seemed just right to use it. I’d read an article about a Mormon bishop who disguised himself as a homeless person to test his congregation. I wanted to write about that, but it wasn’t until I added the bit about the pilot that the story came together, a tale of how much it really does matter to be with the right person in order to reach one’s full potential, and how much influence we can have on those around us to help them build the strength to make good choices in life.

I met Jeff in the first grade, so we’ve known each other 47 years. We’ve been both close and distant, but in the end, I have so much history with him that there will always be a strong bond. And yet, he has repeatedly made deliberate attempts to do things that any normal person would understand are alienating and hurtful. Why would he do those things, when I know he genuinely likes me? My story, “A Life of Horror,” came out of that situation, when I finally realized he was simply protecting himself from the pain he’d learned to cope with as a child.

I read another article about a young Mormon couple who married in the temple, and it wasn’t until later that the husband realized his “wife” was actually a transgender, still pre-op with all his male parts. How could I not write a story about that? “Mrs. Mariposa” is also influenced by the play, “M. Butterfly.” I think it’s always best to have two or more things going on in any one story.

My husband’s brother in Salt Lake has a gay son, and years ago when the son came out to his father, his father asked my husband what he should do. Gary replied, “If you don’t want to lose your son, then accept whatever partner he brings home as part of the family.” My brother-in-law seemed to make that attempt, despite being a bishop in the Church. But when gay marriage became legal in Utah and the son went to the courthouse with his partner to marry, my brother-in-law said he couldn’t make it, he had too much work to do. His son married with no other family members present. It was a lost opportunity that can never be recovered. That’s where my story, “Making Plans,” came from.

Finally, a fan contacted me once and asked if we could talk. We met at a coffeehouse near my home, and after I determined he wasn’t a crackpot or murderer, I invited him back to the house to meet Gary. It turned out that this man was still an active Mormon, with a wife and children, but he was also sexually active with other men. I asked how he managed to leave his family so regularly to trick, and he replied, “Oh, I just tell my wife I’m going Home Teaching.” Home Teaching, of course, is a Mormon program where congregants visit each other to give a spiritual message and make sure the family is okay. I found his actions appalling, but I also knew that someday I’d write a story about it.
So there is always an abundant source of “real” material, which I then have to make some effort to disguise so as not to offend the people I’ve based the stories on. What is satisfying is developing a story, no matter where the idea came from, that seems to take on a life of its own.
Posted by The Story Prize at 2:38 PM