Kirstin Valdez Quade: All Work and No Play...

In the 23rd in a series of posts on 2015 books entered for The Story Prize, Kirstin Valdez Quade, author of Night at the Fiestas (W.W. Norton & Co.), discusses ways to keep herself engaged with her writing. 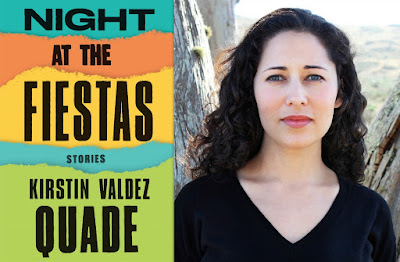 When I began writing, it was all play: make-believe and dress-up and What If? It was exhilarating to lose myself in a fictional world, then reemerge hours later, spacy and dazed, my voice creaky from disuse.

As my stories began to be published, as I began to earn my living from writing (or at least from teaching writing) that sense of play drained. I was getting what I wanted, but the fun was gone. On the most difficult days, writing began to feel deadly serious, and I’d approach my desk with anxiety—and as a result, it was harder and harder to achieve that immersion and loss of self.

And so, as in a marriage gone stale, I discovered I needed to spice things up, to make a game of it. I began to give myself challenges.

Often all I need to set my anxieties aside and to sink into the world of the piece is some specific, concrete problem to solve. Something manageable. The challenge might come as a formal constraint: to write in the omniscient point of view, to have the story take place in a single afternoon or in a single room. Or it might be based on content: say, to include a form of public transportation. Occasionally the challenges feel self-conscious, but the challenges are a tool, designed to get me into the world of the story. And once I’m there, I can do away with what isn’t working.

None of this is original. The same theory lies behind the exercises in introductory creative writing classes. But my point is that these challenges don’t have to just be for beginning writers. A writer I know puts an animal in each of her stories. Other writers make sure to include a list of specific words.

Not that the play is always fun, not exactly. The stakes still feel high, but they feel high because I am working through a puzzle, trying to understand my characters, and because I am invested in the work. The challenge diverts my attention and anxiety so that, almost in spite of myself, I can enter the dream of the story I am writing.

My favorite challenges are based on stories I love. For example, when I read Antonya Nelson’s “Soldier’s Joy,” I was blown away. She starts the story with a dream: “In her dream, her husband had written her a letter. It closed with the following sentence: I’ve looked at myself in the mirror—an admittedly warped and unreliable façade—and been keenly aware of how lucky I am that you still want to live with me.”

Wait a minute, I thought. We’re starting with a dream? Before we even get to know the character’s name, we’re being asked to spend time in her subconscious? Before we even get a sense of what is happening, we’re being told what definitely didn’t happen, except in some anonymous lady’s head? Also, aren’t we all agreed that we should never, ever, ever talk about our dreams in polite company, because other people’s dreams are BORING, and maybe the only thing worse than subjecting a listener to our own dreams is to subject them to the dreams of a person who doesn’t actually even exist?

In Nelson’s story, the dream pays off. It reveals what the protagonist knows but doesn’t know she knows; it reveals her deepest wishes and insecurities.

At the time, I was working on a story called “Ordinary Sins,” about a young woman’s relationship with her priest. I was having trouble finding my way into the story so I set a challenge: to start the story with a dream. And the creepiness and the mystery of what I came up with became just the engine I needed to get the story off the ground.

Writing is always about problem solving. It’s about putting our characters in a situation with a particular set of props and limitations, and then watching them until they MacGyver their way to a story. And sometimes I need to give myself those props and limitations, too. Within constraints creative possibilities open up, and then I can get back to the serious work of make-believe.