In the 20th in a series of posts on 2015 books entered for The Story Prize, Sandip Roy, author of Don't Let Him Know (Bloomsbury), discusses his impulse to write and his hidden influences. 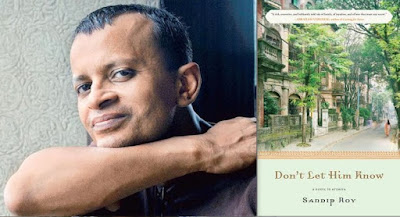 What do you think is the source of your impulse to write stories?
I work as a journalist but think of myself as an eavesdropper. Whether I am on a bus or at the gym or at a party, I love listening to snatches of conversation, even if it’s out of context, and then imagining lives around them. As a child, I used to kick a small piece of Lego around the house, from terrace to verandah to living room. I called it my “kickabout” and it would kickstart my creative process. The stories I wrote were juvenile, derivative of whatever I was reading at that time. I remember a “novella” which I hand-wrote based on the song "Puff the Magic Dragon" but liberally influenced by The Hobbit. But in the end, as has been said, writing is an act of remembering. And Don’t Let Him Know, while not autobiographical, is very much an act of remembrance. Like the great-grandmother in "Great Grandmother’s Mango Chutney," I too grew up with a great-grandmother, my Majononi. I was lucky to have her around into my teens. She, like my character, had a cast-iron stomach and great appetite for things she was not supposed to have—the more deep-fried the better. While Boroma in my book is not the Majononi I grew up with, it was indeed a pleasure to remember her voice again as I wrote and to hear her voice in my head again after so many years.

Where does a story begin for you?
Very often a story begins with a scene. For me, Don’t Let Him Know flowed out of an image I had in my head. A woman and a child standing on a terrace looking at the street below them, a market street somewhere  in Calcutta. A man is walking down that street looking up at them. The relationship between the trio is unknown. But I could see that scene clearly in my head and the street, I must admit, looked not that different from the street I grew up on. But I was intrigued by that tableau and my story went backward and forward from that point. In the end that scene is neither at the beginning nor the end of the book. It is however the last scene in the chapter "Games Boys Play." While for most readers it will just be another scene in the book, for me it is the moment the book stops and catches its breath. It is the still-frame of the book and everything rewinds and fast forwards from it. However in general, I have often found whether I am writing fiction or in my journalism, it is hard for me to begin if I do not have a first sentence and a last sentence in mind. Perhaps it’s my training as a software engineer, but I need Point A and Point Z in my head, and then I can work my way logically step by step from A to Z. The final product might no longer have the Point Z at the end or the Point A at the beginning. But to start I need to have a beginning and an end in my head.

Name or describe some hidden influences on your work.
Some of the influences in my work were so hidden I did not even realize them myself. I grew up in South Calcutta, which is not the part of the city you see in films that feature the city. The grand mansions of North Calcutta are regarded as the historic part. The sweeping Howrah Bridge is the quintessential iconic Calcutta landmark. But South Calcutta with its single family homes with balconies with wrought iron railings and its front porches and its shady trees, was not regarded as anything exceptional. Perhaps because they were not regarded as special, these houses are being demolished at an alarming rate and replaced by cookie-cutter characterless apartment blocks. Though I did not think about it while writing it, Don’t Let Him Know is very much a South Calcutta book, the lives its characters lead intertwined with the neighbourhood.

The other influence I realized was that this is a book about terraces. It is only in re-reading Don’t Let Him Know that I realize so much of the action happens on terraces. This is where a young Avinash and Sumit dream, fantasize, and explore tucked out of sight of the bustling world. This is where a young Amit comes to hide a broken watch. And the terrace is where a young Romola learns hard truths from the neighbour’s servant boy. In a city like Calcutta, terraces were where we played games, conversed with neighbours, romanced, and hung out the washing. They were our social media before Facebook and WhatsApp. Now as the houses give way to apartment blocks, the terraces belong to everyone and thus to no one. In retrospect this book is a valentine to terraces.

Describe your collection in ten words or less.
A book about family secrets and the shadows they cast.
Posted by The Story Prize at 8:32 PM